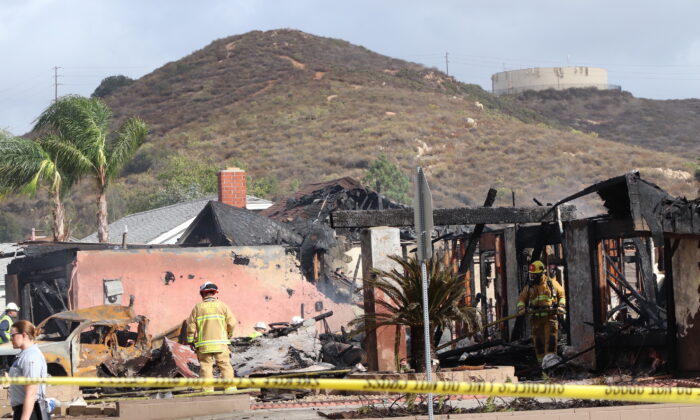 Investigation Continues Into Cause of California Plane Crash That Killed 2

SANTEE, Calif.—Investigations continue into the cause of a twin-engine plane crash on Oct. 11 in a residential neighborhood that killed at least two people—a United Parcel Service truck driver and an Arizona cardiologist—while injuring several others.

The C340 twin-engine Cessna was en route from Yuma, Arizona, to San Diego when it crashed into two residential homes at the corner of Jeremy Street and Greencastle Street at around 12 p.m.

Two people were confirmed dead and two more injured were transported to a hospital with unknown conditions.

Officials at Yuma Regional Medical Center in Arizona confirmed that the pilot killed in the crash was cardiologist Dr. Sugata Das.

“As an outstanding cardiologist and dedicated family man, Dr. Das leaves a lasting legacy,” chief medical officer Dr. Bharat Magu said in a statement. “We extend our prayers and support to his family, colleagues, and friends during this difficult time.”

In addition to his work at the hospital, Das was also a director of the nonprofit Power of Love Foundation, which works to combat AIDS and HIV around the world. According to the foundation’s website, Das owned two planes, including the Cessna, and he regularly flew between Yuma and San Diego, where his family lives.

The deputy fire chief confirmed that a UPS truck outside the home sustained major damage. UPS issued the following statement confirming that one of their employees was killed in the crash: “We are heartbroken by the loss of our employee, and extend our deepest condolences to his family and friends. We also send our condolences for the other individuals who are involved in this incident, and their families and friends.”

According to NBC7, UPS identified the driver in a letter to employees as Steve Krueger, who had worked for the company for 30 years.

The National Transportation Safety Board is leading the investigation into the crash. Although the cause will take months to determine, radio transmissions between the pilot and an air traffic controller suggest the pilot may have been disoriented, unclear if he was climbing or descending.

At one point in the audio, the controller tells the pilot to “climb immediately.”

“It looks like you’re descending, sir. I need to make sure you are climbing, not descending,” the controller said, according to the audio recording.

Local resident Sandra Diaz told The Epoch Times that she witnessed an elderly couple, who lived near one of the houses that was crashed into, pulled out of their backyard by someone, but their dog was killed.

“Today was my day off. … I was getting ready to grocery shop. … I left the house and that’s when I heard the plane. … They said it was a twin-engine plane. … That’s scary,” Diaz told The Epoch Times.

Aerial news footage showed a pair of homes gutted by fire at the crash site with the charred wreckage of a vehicle in the roadway in front of them.

Initial reports suggest the plane may have struck a UPS delivery truck before plowing into the houses.

It was unknown how many occupants were aboard the six-seat aircraft when it plunged to the ground, but the Santee Fire Department said no one aboard would have survived the crash.

“Our primary concern when we got on scene was obviously the extinguishment of the fire, and treatment of any victims,” Santee Fire Department Battalion Chief Justin Matsushita said, adding that the department is preserving material from the crash for further investigation.

San Diego Gas & Electric turned off power in the nearby neighborhood, and city officials closed Jeremy Street and North Magnolia Avenue between Mast Boulevard and Second Street. The debris extended approximately 1 block to the southeast of the crash site.

Santana High School returned to normal operations by mid-afternoon, with students being “released for lunch or dismissal, if they do not have any other classes today,” according to a campus advisory.

The Red Cross established an evacuation center at Cameron Family YMCA on Riverwalk Drive in Santee for residents forced from their homes due to the crash.