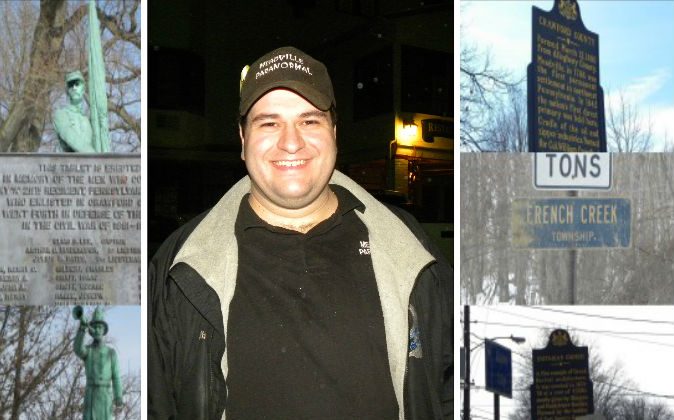 Investigator of the paranormal and radio host Jim Malliard, and scenes from Meadville, Penn. (Courtesy of Meadville Paranormal)
Beyond Science

Investigating the Paranormal, Jim Malliard Finds His Place in the World

Jim Malliard has learned a lot about life while investigating the afterlife.

How to persevere when faced with adversity has been one lesson. People haven’t taken too kindly to the talk of ghosts, strange electromagnetic activity, and other paranormal phenomena in Malliard’s hometown of Meadville, Penn.

The population is about 13,000; its claims to fame include native Sharon Stone, the invention of the zipper, and a part in helping slaves escape to freedom via the Underground Railroad. Malliard described Meadville as a “cute little industrial, snowbelt town.”

Many of its residents had never heard anything about paranormal investigation before Malliard established his tight-knit, dynamic, and slightly quirky investigation team, Meadville Paranormal, in 2008.

“When we got into the paranormal, the history came alive,” Malliard said. He was motivated to start his investigations by a love of history, personal encounters with the paranormal, and a desire to help people come to terms with unexplained phenomena. Despite the town’s cold reception, the team continued to hand out business cards. Malliard said, “Standing the test of time and being committed to developing relationships with people has helped.”

One of the most touching moments Malliard has experienced was when a man in the town came up to him and said, “I see you’re into the paranormal [Malliard was wearing a hat that said as much]. I’ve got to tell you something, but it can’t leave us. I see my deceased wife every evening before I go to bed. It makes me happy. I had to tell somebody. She’s been gone four years, but if I told my kids, I’d be at the home. They wouldn’t believe me, they’d blow me off and think I was going crazy.”

Malliard said: “The smile on his face and the relief of finding someone else who would believe him made his day. It made my day too.”

“The smile on his face and the relief of finding someone else who would believe him made his day. It made my day too.”
— Jim Malliard

Aside from the struggle for acceptance in their community, the investigators have also met with internal challenges. Malliard described an event in 2011 that “shook the team to the core.” One of the team’s junior investigators, Matt Myers, was diagnosed with Leukemia. Malliard and his wife were at a demolition derby at the county fair when they heard the news. They left to go to the hospital in Pittsburgh and be with their teenaged teammate.

“It made us realize that there are definitely more important things in life—not necessarily the afterlife—that we need to pay attention to,” Malliard reflected. Thankfully, Matt’s health has since improved. The team has become like family, Malliard said, and each member has his or her strength.

“It made us realize that there are definitely more important things in life—not necessarily the afterlife—that we need to pay attention to.”
— Jim Malliard

His wife, Tabby, is one of the members. One of her strengths is investigating the electronic voice phenomenon (EVP). Spirits are said to communicate through electronic devices; sometimes the dead are even said to make telephone calls to the living. Investigators listen to the noise between radio stations or watch a blank channel on television, for example, and reportedly hear words spoken by the dead.

Malliard can’t hear EVP, which he said Tabby would attribute to his chronic selective hearing. But he does consider himself somewhat of a seer. His ability to sense things most people can’t became apparent at the age of three. He would tell his parents about the people he could see in the cemetery, people invisible to all others.

Tabby described the team’s journey: “We are a lot closer than when we originally started the team. … [We have] been on trips together and seen a lot of things. The team continues to grow every day with each new curve ball the world throws our way.”

Bill Allen and Joebob (surname withheld) “are not necessarily interchangeable,” Malliard said with a laugh, but they seem somehow inextricably linked. They share the same birthday as well as the same sober personality traits: “They are more level-headed, quiet, strong types,” Malliard explained.

A couple of junior investigators have grown up with the team, and though they are now older than 18, the “junior” prefix seems to have stuck.

“In some respects, it’s not so fun. It can get a little intense at times.”
— Jim Malliard

Mike Smith is a medium. “That’s kind of fun in some respects,” Malliard said. “In some respects, it’s not so fun. It can get a little intense at times.”

When It Got Intense

Malliard gave an example. Smith had just moved back to town after living away for a while. Malliard figured Smith would be busy unpacking, so he didn’t call him to an investigation the team was conducting. Malliard usually turns off his phone when he’s with a client, but a ringing interrupted the investigation this time.

It was Smith. “Why didn’t you call me to the investigation?” he asked. He told Malliard, without having been told himself what the team was doing at the time, that the answer to the questions they had been asking for the past 15 to 20 minutes was under the coffee table.

Malliard looked at the coffee table in the client’s living room. It was bulky and covered with books and other objects. He didn’t particularly want to, a) seem crazy by asking the client to flip over the coffee table, b) go through the physical trouble of clearing it off and flipping it. But, at Smith’s urging, Malliard complied.

The production numbers written on the bottom of the coffee table corresponded to the date the client’s child had died.

While it was, in a way, the answer the client was looking for, it was also a difficult one to face.

It was an intense moment for that reason, but Malliard said Smith also adds intensity to the investigations because he can be very cryptic, which can be frustrating to the others.

Intense, but Not Scary

It was hard for Malliard to describe precisely how encounters with the paranormal make him feel. He’s never felt fear, he said. When asked why, his first response was, “I’m just too stupid to know better.”

After reflecting for a moment, he said, “It’s not necessarily fear, I just respect it.”

“When you respect it and know that there are things out there that could be horrible, you don’t go in looking for them or trying to get them.”

Part of his antidote to fear is also his skepticism. He said he 100 percent believes that paranormal phenomena do exist, but with individual cases, even when he hears or sees something himself, he questions it. Learning to accept things that are hard to accept has been part of Malliard’s journey.

He began hosting his paranormal talk radio show, the Malliard Report, in 2011. He has interviewed a variety of like-minded researchers, and some not so like-minded, beyond Meadville’s borders. He gave the example of a guest who believed demons are behind everything. While Malliard doesn’t believe this to be true, he found it interesting to hear why this guest thinks it’s so.

“It helps me understand what I believe,” Malliard said. For example, he was skeptical about stories of angels helping people, but the more he listened to the stories from people who hold this belief, he said to himself, “OK, I can see that.”

His is, in a way, a quest for truth. One of Malliard’s favorite quotes is from George Washington: “Truth will ultimately prevail where there is pains to bring it to light.”

Malliard’s fascination with history has brought with it a great appreciation of some of America’s great historic figures. He said of Abraham Lincoln: “How that man had so much class and grace … while his country was crumbling around him, I don’t know.”

While Malliard’s daily feats aren’t as heroic or historic as those of Washington or Lincoln, the wisdom of these role models has its applications in his life. Another of Malliard’s favorite quotes (this one by Lincoln) could perhaps relate to Malliard’s decision to stick to his guns even if others don’t understand his fascination with the paranormal: “I desire so to conduct the affairs of this administration that if at the end, when I come to lay down the reins of power, I have lost every other friend on Earth, I shall at least have one friend left, and that friend shall be down inside of me.”