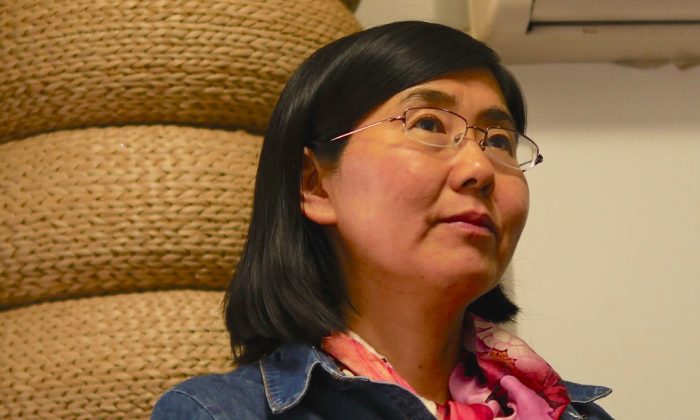 As all mothers do, Chinese human rights lawyer Wang Yu wanted to protect her child. But she couldn’t—not in China, she explained.

Speaking to The Epoch Times, Wang recounted how the Chinese authorities tried to silence her by threatening her son’s well-being, an experience she calls “the most terrifying experience” of her life.

In 2008, Wang was sentenced to 2 1/2 years in prison for seeking legal redress against local authorities. The experience made her realize “the darkness of justice and arrogance of power” in China—and that was when she found her calling in representing dissidents and minority groups.

Most recently, on June 8, Chinese authorities in the Inner Mongolian city of Ulanhot have banned Wang from traveling abroad and refused to allow her to renew her passport. The authorities told her she is now considered a threat to national security.

Wang herself has been targeted by Chinese authorities for providing legal services to Falun Gong adherents who appeal their arrests and sentences.

Falun Gong, also known as Falun Dafa, is a meditation practice that became hugely popular in China during the 1990s. However, in July 1999, then-Chinese Communist Party leader Jiang Zemin deemed the group a threat to communist rule and ordered a nationwide persecution. Millions have been arrested and subjected to brainwashing, forced labor, and torture.

In July 2015, while representing a client in Shanhe City in northern China’s Hebei Province, Wang was forcibly dragged out of the courthouse by court sheriffs.

“There could be risks anytime from taking on Falun Gong cases, such as not being able to see [my client] at the detention center,” said Wang, adding that she could also face detention by the police. Wang said police have shown up at her home to harass her son and mother.

Wang was in prison when she won the awards. She was one of many lawyers arrested during what is now referred to as the “709 Incident.”

On July 9, 2015, the Chinese regime rounded up hundreds of human rights lawyers and activists across the country. The crackdown is considered by some Chinese human rights groups to be the most severe suppression of dissidents since the Tiananmen Square massacre. The lawyers and activists were detained and interrogated, with some, like Wang, forced to make televised “confessions” about committing wrongdoing—the Chinese regime’s method of discouraging their activism.

On July 9, 2015, her husband, Bao Longjun, and their son, Bao Zhuoxuan, were arrested at an airport. The authorities prevented their son from boarding a flight to Australia to continue his high school education.

Meanwhile, local police pried open the door to Wang’s house, placed a hood over her head, and dragged her to a police car.

She said her son, who was only 15 at the time, was confined in a motel for three days after being detained, and he was thrown onto the bed repeatedly when he tried to escape. He was released three days later and eventually sent to her grandmother’s place in Inner Mongolia.

In October that year, her son faced even worse treatment when he was caught in Burma (also known as Myanmar), after he crossed the border via southern China’s Yunnan region, said Wang. He was trying to escape to the United States.

“He [her son] was cuffed at both the hands and feet. He was a very skinny 15-year-old kid. How did they bear to put on cuffs?” said Wang. “This incident has become a shadow hanging over my head ever since.”

When her son was taken back to Yunnan, he was beaten repeatedly with a stick by officials at the local police station, said Wang. She added that officials threatened to smash his skull if he didn’t cooperate. Meanwhile, Wang was still in custody.

The family of three eventually were sent to Ulanhot City in Inner Mongolia and were housed in a rental home arranged by the State Security Bureau. A dozen surveillance cameras were pointed in the direction of the house. Sending dissidents off to a remote area is a common tactic the Chinese authorities employ to prevent them from speaking out.

“Whatever Bao Longjun [her husband] and I do, such as going out to throw away the trash, the police would follow us. They followed us everywhere,” said Wang.

As for her son, Wang explained that the police would escort him everywhere he went. Surveillance cameras were installed at a local school her son attended, solely to monitor him, according to Wang.

Wang recalled that her son lived in such a repressive environment for about two years. He was eventually diagnosed with clinical depression.

The 709 Incident has left Wang with a sullen view of the legal profession in China.

“Now I believe there is no law in China. The so-called law written on paper is used to restrain average citizens. As for those rich and powerful, they are not restrained by the same law,” she said.

And despite the fact that there are about 300,000 lawyers in China, and the number of lawyers joining the bar keeps increasing every year, most are powerless to help dissidents who are harassed and persecuted by the Chinese regime.

The statutes and laws that China has enacted are only for show, she said. “With China’s public security, procuratorial, or judicial organs, it is all about putting up a fake facade to appear as a nation with rule of law.”

Wang said the regime uses this for its own agenda. “The essence of rule of law is about limiting the power of the government,” she said. “But the Chinese Communist Party is using the rule of law to reinforce its own rule. So lawyers become a tool for it to reinforce its rule. Being a lawyer has become an awkward profession [in China].”