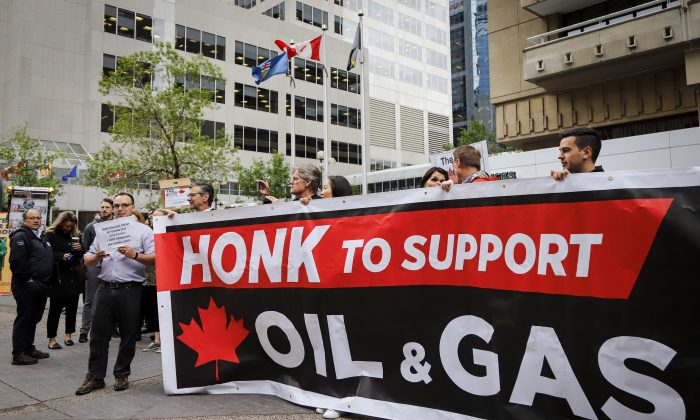 Oil and gas industry supporters rallied outside the venue where Finance Minister Bill Morneau spoke in Calgary on June 19, 2019. Strong political will is needed at all levels of government to curtail regulations that thwart the growth of the oil and gas sector. (The Canadian Press/Jeff McIntosh)
Economy

Canada’s energy sector is taking its lumps from regulation that many doubt will ever achieve its lofty objectives. Badly needed investment is flowing to the United States instead of Canada due to a more competitive business environment.

Progress in chipping away at provincial protectionism is fleeting, but some green shoots were in evidence after the provincial premiers’ meeting in early July. However, the overall commitment appears lukewarm compared with Alberta’s push to streamline regulation and kick-start its economy.

Overlapping of federal and provincial regulation adds to the morass in the name of reducing greenhouse gas (GHG) emissions. Some provinces have their own versions of federal policies, creating difficulties for business compliance, not to mention added costs.

“We have seen that regulatory duplication and inconsistencies have been an issue in the eyes of energy investors that have negatively impacted investment attractiveness. For instance, the percentage of respondents deterred by regulatory duplications in Alberta was 56 percent in 2018, compared to 2 percent for Texas,” said Elmira Aliakbari, associate director of Natural Resource Studies at the Fraser Institute, referring to a recent study by the think tank.

A 2016 study suggested that interprovincial trade barriers cost the Canadian economy up to $130 billion annually.

At a Senate open caucus forum, the situation was called a “national embarrassment.” Most of the trade barriers are differences in regulation from province to province, which are very tedious for businesses to circumnavigate. These include different safety, transportation, and labour qualification requirements, among others.

The Canadian Association of Petroleum Producers (CAPP) is pushing for a more streamlined regulatory process in order to be more competitive with the rest of the world while not sacrificing environmental concerns. It also raises the issue of duplication between federal and provincial project assessment and reporting requirements. For example, CAPP members don’t want to have to deal with both federal and provincial methane reduction policies.

“Mutual recognition,” where a good or service legally provided in one jurisdiction becomes permitted in another region even with differing regulations, is a solution touted by the Senate and the OECD.

The ideals of the April 2017 Canadian Free Trade Agreement (CFTA)—to mitigate interprovincial barriers—have hardly had the desired effect. “Almost half of the agreement’s 345 pages are filled with exceptions to the agreement and opt-out measures,” according to senators Jane Cordy and Diane Bellemare.

Laura Jones, executive vice-president of the Canadian Federation for Independent Business, highlighted on BNN Bloomberg how “ridiculous” it is that the provinces have 123 exceptions and that to remove one of them, all the other provinces must agree. The provincial leaders agreed to review the 123 exceptions by year-end and eliminate as many as they can.

The CFTA established a federal-provincial body, the Regulatory Reconciliation and Cooperation Table, to advance regulatory alignment across the provinces. Canadian Chamber of Commerce CEO Perrin Beatty indicated “cautious optimism” in the business community for the CFTA contingent upon the success of this body.

Some provinces are pulling their weight in cutting red tape, but others are dragging their feet. Alberta, under Premier Jason Kenney, is removing half of its CFTA exceptions and committed to reviewing the rest. Ontario and Nova Scotia are waiving registration fees for businesses registered in other provinces.

British Columbia and Alberta have been at odds about pipelines. The western-most province is pursuing reforms toward transport of heavy crude, seemingly oblivious to the better safety record of pipelines.

Bill C-69 on environmental impact assessment, Bill C-48 on the moratorium on oil tankers, the provincial cap on GHG emissions, and new rules on methane emissions are examples of how regulation is increasing and creating greater uncertainty for the energy sector in Canada.

In addition, what’s hurting Canada’s energy sector is that the United States has been rescinding regulations.

And for all of Canada’s regulation, the Fraser Institute argues, “The climate impact of the Canadian policy will be very close to zero, so that any costs borne to achieve the intended GHG reductions will likely result in minimal environmental benefits.”