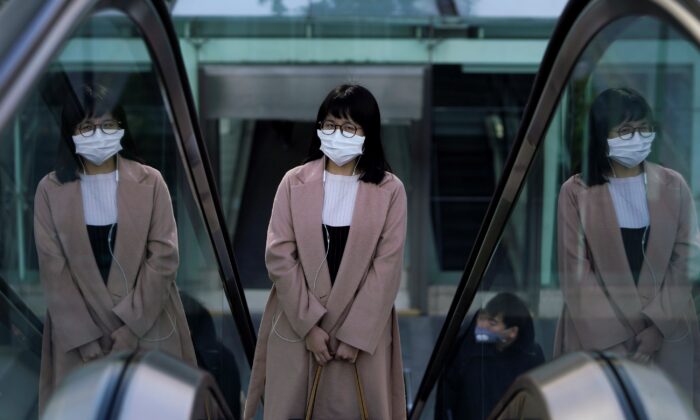 A woman wearing a mask is seen as the country is hit by an outbreak of the novel coronavirus in Shanghai, China February 10, 2020. (Aly Song/Reuters)
By Zachary Stieber

An advance team of experts organized by the World Health Organization (WHO) arrived in China to help efforts against the new coronavirus, the organization’s head told reporters on Monday.

The advance team was preparing things for the rest of the team, Dr. Tedros Adhanom Ghebreyesus said at a press conference at the organization’s headquarters in Geneva. The advance team, led by Canadian doctor Bruce Aylward, departed for China on Sunday.

Tedros couldn’t say when the rest of the team would arrive but expressed hope that they would be there “as soon as possible.”

China had repeatedly pushed off the team despite repeated offers of assistance.

The full team will be made up of 10 to 15 experts but the aim would be 10 “to make it as manageable as possible,” Tedros said. The team would meet with Chinese counterparts and develop a plan in terms of where to go, what to visit, and which unanswered questions to focus on.

“We have fully empowered them,” Tedros said when pressed on where the team would go and what it would be doing. “We don’t want to tell them what to do.”

He recounted WHO leaders seeing the team off at the airport, telling them: “‘You’re fully [empowered]. You’re the experts and we want you to tell us what the challenges are.'”

Tedros repeatedly declined to give information on the background of team members and none have been named outside of Aylward.

“This is a moment for us to step back and let the scientists do their work and then wait for them to give the answers they come up with,” he said.

Some of the proposed team members were American, U.S. officials have said, including experts from the Centers for Disease Control and Prevention (CDC). The federal agency didn’t return questions about whether CDC experts were among the advance team or some of the rest of the members.

Scientists still haven’t pinpointed the origin of the virus, which reportedly began infecting humans in Wuhan in December 2019. They’re also working on questions surrounding the severity of the virus, the extent of the incubation period, and other details. A paper from Chinese scientists published over the weekend said there were incubation periods of up to 24 days.

“We believe that many of the ongoing investigations that are actually being implemented by Chinese scientists are getting those answers,” Dr. Mike Ryan, the head of WHO’s emergency response division, told reporters. The team on the ground would be focused on supporting those investigations.

“The team is there first and foremost to learn. And to understand not only the investigations that have been carried out so far in China, but also to understand the nature of what is one of the largest public health responses in history in China,” he said.

WHO officials have repeatedly praised China’s response to the virus despite widespread questions of the data Chinese officials have been releasing, including the number of deaths and illnesses.