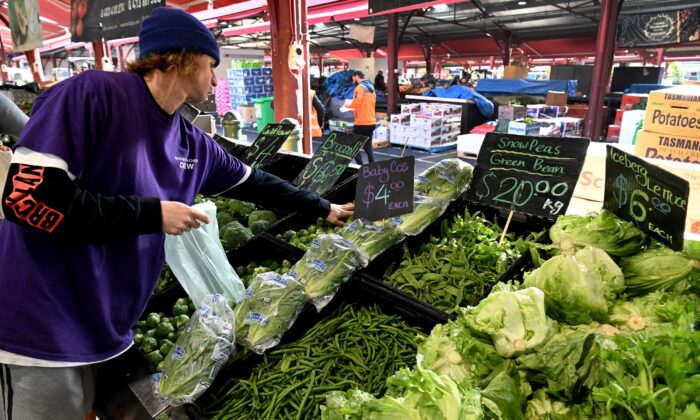 A shopper places produce in a bag at Victoria Market in Melbourne, Australia, on July 5, 2022. (William West/AFP via Getty Images)
Australia

Australian consumers and businesses are increasingly feeling bleaker about the country’s economic outlook as interest rates and inflation continue to rise.

Three surveys by Westpac bank and Melbourne Institute, ANZ bank and Roy Morgan, and National Australia Bank (NAB) have found that consumers and mortgage holders are getting more and more pessimistic about the future.

According to AMP senior economist Diana Mousina, the drops in sentiment were not surprising as consumers and businesses were facing high recession fears domestically and globally, rising inflation, and interest rate hikes.

Evans pointed out that the drop in sentiment was similar to the two-month decline during the COVID-19 pandemic and the falls recorded during the global financial crisis in 2008, and the recessions in the 80s-90s.

The Westpac survey also found that consumers were getting more worried about interest rates, which had not been as noticeable previously.

Meanwhile, the ANZ-Roy Morgan survey, which was conducted on 1,498 Australians between July 4 and July 10, showed that customer sentiment dropped for two weeks in a row, especially for mortgage holders impacted by higher interest rates.

The ANZ-Roy Morgan consumer confidence index fell 2.5 percent to 81.6, a far cry from the monthly average of 112.4 recorded in the past three decades.

At the same time, the confidence index for homeowners with a mortgage dropped sharply by 5.4 percent.

Since discussions about interest rate rises emerged in late April, consumer confidence among mortgage holders has suffered a 25 percent drop, while confidence among renters has declined by four percent.

Although enterprise owners and managers have held a higher degree of optimism than consumers, the NAB’s latest survey found that business confidence fell five points to a below-average +1 index point in June.

“Confidence in the retail sector took a significant hit, falling more than 20 points to be well into negative territory, reflecting concerns about the outlook for household spending,” NAB chief economist Alan Oster said.

However, forward orders and capacity utilisation were trending up, which suggested that business conditions would remain solid in the near term.

“Overall, the survey suggests firms are increasingly wary of how the economy will hold up over the months ahead, despite continuing to experience fairly strong conditions at present,” Oster said.

“Still, reasons for optimism remain, including elevated household savings and a strong labour market, which will weigh against concerns about the impact of inflation and interest rate rises on consumers.

“As such, the extent to which businesses’ fears are justified remains to be seen.”