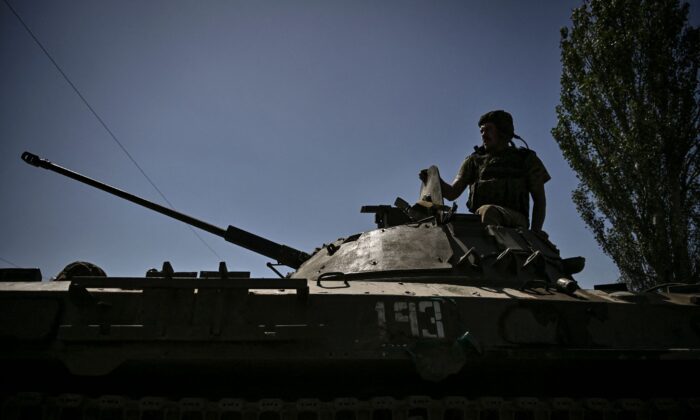 A member of the Ukrainian troops stands on an armoured vehicle moving towards the front line in the city of Lysychansk in the eastern Ukraine region of Donbass, on June 9, 2022. (Aris Messinis/AFP via Getty Images)
Russia-Ukraine War

KYIV—Ukrainian forces were holding their positions in intense street fighting and under day and night shelling in Sievierodonetsk, officials said, as Russia pushes to control the bombed-out city, the key to its objective of controlling eastern Ukraine.

Sievierodonetsk and its twin city Lysychansk, on the opposite bank of the Siverskyi Donets river, are the last Ukrainian-controlled parts of Luhansk Province, which Russia is determined to seize as one of its principal war objectives.

Ukraine’s Security Council Secretary Oleksiy Danilov said on Thursday the situation in Sievierodonetsk was “extremely complicated” and Russian forces were focusing all of their might in the area.

“They don’t spare their people, they’re just sending men like cannon fodder … they are shelling our military day and night,” Danilov told Reuters in an interview.

In a rare update from the city, the commander of Ukraine’s Svoboda National Guard Battalion, Petro Kusyk, said Ukrainians were drawing the Russians into street fighting to neutralise their artillery advantage.

“Yesterday was successful for us—we launched a counteroffensive and in some areas we managed to push them back one or two blocks. In others they pushed us back, but just by a building or two,” he said in a televised interview.

Reuters could not verify the battlefield reports.

In the south, where Russia is trying to impose its rule on a tract of occupied territory spanning Kherson and Zaporizhzhia Provinces, Ukraine’s defence ministry said it had captured new ground in a counter-attack in Kherson Province.

President Volodymyr Zelenskyy said in an evening address that Ukraine had “some positive developments in the Zaporizhzhia region, where we are succeeding in disrupting the occupiers’ plans.” He did not provide details.

Reuters could not independently verify the situation on the ground in Zaporizhzhia or Kherson. Russian-installed proxies in both provinces say they are planning referendums to join Russia.

Speaking in Moscow to mark the 350th anniversary of Russian Tsar Peter the Great’s birth, President Vladimir Putin said, “Peter the Great waged the Great Northern War for 21 years. It would seem that he was at war with Sweden, he took something from them. He did not take anything from them, he returned (what was Russia’s).”

To the west of Sievierodonetsk, Russia is pushing from the north and south, trying to trap Ukrainian forces in the Donbass region, comprising Luhansk and neighbouring Donetsk Province.

Russia says it does not target civilians.

The devastated eastern port of Mariupol, under siege by Russian troops for months until it fell, is now at risk of a major cholera outbreak, Britain’s defence ministry said on Friday.

There is likely a critical shortage of medicines in Kherson, Britain’s Ministry of Defence said in a Twitter update. Russia is struggling to provide basic public services to the population in Russian-occupied territories, it claimed.

In the self-proclaimed Donetsk People’s Republic, one of Russia’s proxies in eastern Ukraine, a court sentenced to death two Britons and a Moroccan who were captured while fighting for Ukraine, Russian news agencies reported.

Britain condemned the court’s decision as a “sham judgment” with no legitimacy.

By Pavel Polityuk and Abdelaziz Boumzar