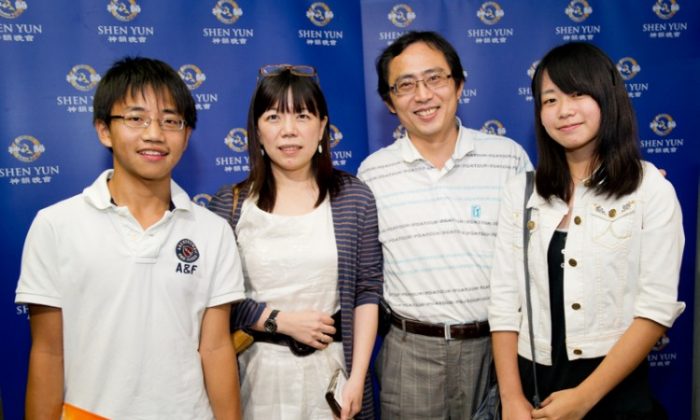 Seeing Shen Yun for the first time, Tung Wei said: “The beauty of Chinese culture is skillfully conveyed through dance. I consider it well worth our time to come to see the show. The performance by young performers particularly highlights the meaning of passing down culture[through the generations].”

Tung Wei said he was fond of the program Joyful Little Monks, at the end of which little monks turned around, smiling in a lively and delightful way. He also highly admired the well-designed stage prop and costumes in the program Lotus Leaves. “It looked as if the lotus leaves were flying,” he said.

Full of praise for the high-tech animated backdrops, he said, “The backdrops are skillfully integrated into the performance, with figures descending from the backdrop to the stage. The connection is terrific.”

He also enjoyed the lyrics of the songs sung by the solo vocalists. He said, “I could sense the meaning of the lyrics, very meaningful.”

Also among the audience were Lin Yufa, president of Taiwan Sugar Federation of Trade Union, and his wife.

Starting a journey by train at 6 a.m. from Taitung to Kaohsiung, the couple showed up at the theater for their first Shen Yun performance.

General Manager of MOLS Corporation and a Rotarian, Ms. Qiu Huiru, said a friend had recommended that she see Shen Yun. Intrigued by what Shen Yun must be like after having seen the spectacular images in the promotional material, she decided to go with her husband, a university professor, and her children. After seeing Shen Yun, on March 18, Ms. Qiu said that she was stunned. “Shen Yun is really deserving of its reputation,” she said.

Ms. Qiu enjoyed the diverse artistic elements presented by Shen Yun, such as classical Chinese and ethnic and folk dance, orchestral music, fine art, and solo vocal performances. She was also amazed by the dazzling costumes and the colors.

According to the Shen Yun website, the costumes are hand-sewn, incorporating vivid colors and elegant details, and are inspired by five millennia of traditional Chinese culture.

Ms. Qiu’s husband, Prof. Jian Nanshan, said he loved the wonderful voices of the solo vocalists. The several vocalists in Shen Yun are well-received Chinese singers who use the bel canto technique, according to the company’s website.

Ms. Qiu said she particularly enjoyed the dance programs. She said Snowflakes Welcoming Spring gave her a very delicate feeling. “The colors of the whole scene showed the prospect of the greenness of newly sprouting plants after the harsh winter. It was full of life. I felt refreshed and free from worry,” she said.

She affirmed her admiration for the Shen Yun artists. “The dance performers look young and are serious and dedicated. They convey their inner feelings into such powerful performances. It must take much effort and time for them to practice. Through their artistic form they present dreams and freedom. It is really touching.”

Classical Chinese dance has a long history of thousands of years, passed down continuously within the imperial palace and ancient Chinese theater. Soaking up profound wisdom from every era and dynasty, it has become a complete system of dance embodying traditional aesthetic principles with its unique dance movements, rhythms, and inner meaning. Classical Chinese dance is rich with expressive power, according to Shen Yun’s website.

Ms. Qin was particularly taken by one of the programs showing China’s current history and the repression of freedom of belief. “What impacted me were the stories depicting the [Falun Dafa] practitioners who remained steadfast in their belief, even under persecution. I feel I’m lucky to live in Taiwan, where we can freely choose our belief. I really admire those people who put aside their fear and pursue what they believe in.”

She praised the artistic presentation of the practitioners’ courage and bravery in remaining true to their faith. They “represented such a fabulous performance which combined strength and beauty. I think it is a very difficult thing to do, so I greatly admire them,” said Ms. Qin.