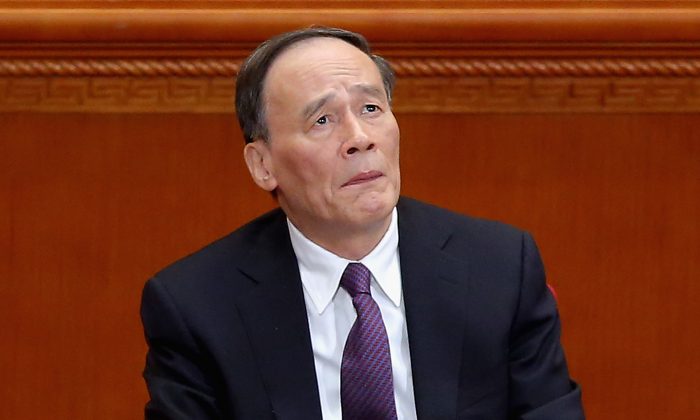 Secretary of the Central Commission for Discipline Inspection Wang Qishan attends the closing session of the Chinese People's Political Consultative Conference at the Great Hall of the People on Mar. 13, 2015 (Feng Li/Getty Images)
China

Before apparatchiks of the Chinese Communist Party are probed by the Party’s internal disciplinary police, they are gathered for a meeting. Seated underneath a horizontal red banner in their white dress shirts, the chief inspector, his deputies, and the Party organ head formally declare open season on malfeasance.

Usually, a picture of the inspection inauguration accompanies the official announcement—a tedious, 2,000-plus character ramble where the chief inspector formally conveys Party leader Xi Jinping’s exhortations for a more disciplined cadre corps to the head of the Party organ.

In a recently-announced round of investigations that attracted international media attention, however, something is amiss.

The announcement for the investigation into the Leading Small Group for Preventing and Handling the Problem of Heretical Organizations, or the “610 Office,” on the website of the Central Commission for Discipline Inspection, is missing the customary meeting hall photo. The group’s head is also unnamed—the phrase “principal person-in-charge” is used instead. The inspection notices for the other Party and government organs, however, contain this information.

It is unclear what the unusual handling of the 610 Office augurs. It is the only agency whose leadership is left unnamed, on the heels of a tumultuous few years at its highest leadership levels. Before Xi Jinping came to power, the 610 Office had been a protectorate of Jiang Zemin, who established the agency to carry out his pet political campaign—the elimination of the Falun Gong spiritual practice from China. Its leadership was stable.

The power and prestige of the agency suffered a decisive blow with the arrest of former vice minister of public security Li Dongsheng in December 2013. Party media then prominently identified Li using his role as lead of 610 Office, rather than his government position, a significant gesture given the sensitive nature of the extralegal organization, its activities, and its direct ties with Jiang Zemin.

Since the arrest of Li, 610 Office chiefs have been replaced frequently and with increasing furtiveness.

State media identified Liu Jinguo as 610 Office head months after he was appointed to the position. Fu Zhenghua, a former crony then turncoat to Zhou Yongkang, the former security chief, replaced Liu in 2015, but the news was censored shortly after it was published. Those who follow such matters had to read the Hong Kong newspaper Sing Tao to find that Huang Ming, the current vice director of the Ministry of Public Security, had replaced Fu in May.

According to multiple searches, there have been no subsequent updates or news reports about Huang leading any public activities in his new job. It is unclear if the epithet of “principle person-in-charge” indicates that the Xi Jinping leadership wishes to keep Jiang’s Gestapo in fact leaderless.

The 610 Office was created by former Party chief Jiang Zemin on June 10, 1999 (hence it’s name), and was given the sole mandate of overseeing the persecution of Falun Gong. Falun Gong, or Falun Dafa, is a traditional Chinese spiritual discipline that involves slow exercises and teachings of truthfulness, compassion, and tolerance. Official Chinese sources said that there were 70 million practitioners in mainland China in 1999.

Today, over 4,000 Falun Gong practitioners have died from torture and abuses, while hundreds of thousands others have been imprisoned, according to Minghui.org, a clearinghouse for information about the persecution.

In a recently published report on live organ harvesting in China, researchers estimate that about 1.5 million organs have been transplanted over the last 15 years, the vast majority which are believed to have come from Falun Gong practitioners who are killed in the process. The European Parliament and the U.S. House of Representatives has condemned the Chinese regime for this practice.