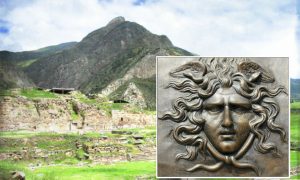 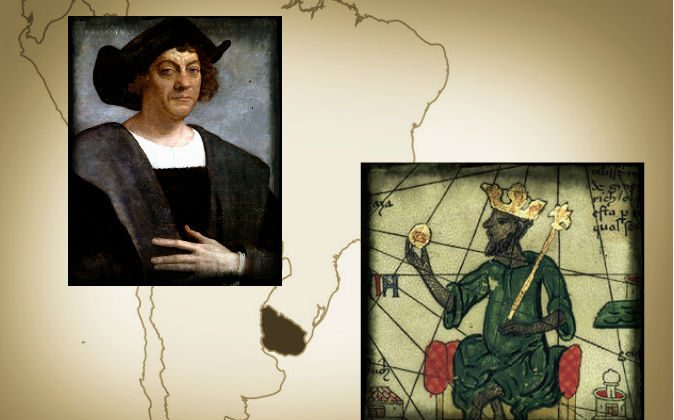 Gold that Columbus found in the Americas seems to have come from West Africa, one indication among several that a West African expedition may have preceded him. Left: Christopher Columbus, painted by Sebastiano del Piombo, 1519. Right: Mansa Musa, a 14th century ruler of the Mali Empire as depicted in the Catalan Atlas, 1375. Background: Uruguay is highlighted on a map of South America. (Wikimedia Commons)
archaeology

Archaeoastronomer William James Veall scoured satellite images of Uruguay’s coastline, discovering a mass of inscriptions carved into the surface of a 2.3-mile (4,700-meter) long, white, crystalline rock formation. Studying the inscriptions, he realized that he may have found evidence of a successful expedition from the Old World to the the New World that predated the arrival of Christopher Columbus. And it wasn’t Viking script either. Thus, the inscriptions seem to have been left by an expedition not recorded in today’s history books.

His initial epigraphical assessment of the Uruguay inscriptions led him to hypothesize that they could be some 3,000 years old.

The rock engraving technique appears similar to a proto-Sinaitic technique in which “a series of ‘pecked’ holes are conjoined by a thin trace to create each separate character,” Veall wrote in an opinion article for Ancient Origins and also on his website. Proto-Sinaitic was used between about 1850 B.C. and 1100 B.C. It is thought to have replaced the Egyptian hieroglyphic-hieratic “combo” system of writing; it was then replaced by the 22-character, Phoenician writing system subsequently used by all West Semitic languages.

Veall asked epigrapher Dr. Clyde A.  Winters, Ph.D., of the Uthman dan Fodio Institute, Illinois, to give his opinion on the inscriptions.

Dr. Winters believes the Uruguay inscriptions were made by a West African expedition controversially thought to have landed in South America about 200 years before Columbus.

Dr. Winters believes the Uruguay inscriptions were made by a West African expedition controversially thought to have landed in South America about 200 years before Columbus.

“I believe these inscriptions were written by some of the scouts of Mansa Abubakari that he sent out ahead of the main expeditionary force of at least 25,000. They appear to be inscriptions like those I found in Brazil and North America that was telling the members of the expedition the best places to establish settlements,” Winters wrote to Veall, as quoted by Veall in Part 2 of his Ancient Origins article.

Mansa Abubakari was the emperor of Mali. He  handed the throne over to his brother in 1311 A.D. and set off on an expedition to see if he could find a coast on the other side of the Atlantic. Winters said that the Uruguay inscriptions are clearly in the Manding System of Writing, which would have been used by Abubakari’s expedition.

In 2000, the BBC looked at other evidence Abubakari reached South America before Columbus. A research project in Mali tracing Abubakari’s journeys uncovered evidence that, in 1312, Abubakari reached a part of Brazil’s coast known today as Recife. The researchers said they found written accounts of Abubakari’s expedition in Egypt, in a book written by Al Omari in the 14th century.

In 2000, the BBC looked at other evidence Abubakari reached South America before Columbus.

The BBC explained that the researchers were, “examining reports by Columbus, himself, who said he found black traders already present in the Americas. They also cite chemical analyses of the gold tips that Columbus found on spears in the Americas, which show that the gold probably came from West Africa.”

Traditional African historians known as Griots, who pass on the history orally, may have intentionally kept the successful expedition secret. Malian scholar Gaoussou Diawara, who wrote the book “The Saga of Abubakari II,” told the BBC: “The Griots found his [Abubakari’s] abdication a shameful act, not worthy of praise … For that reason they have refused to sing praise or talk of this great African man.” But, the Griots began to open up about the success of Abubakari’s expedition.

They also cite chemical analyses of the gold tips that Columbus found on spears in the Americas, which show that the gold probably came from West Africa.

Oral accounts are not taken as seriously by many historians, however, as physical evidence, noted Diawara.

Though the Uruguay inscriptions use the Manding System, leading Winter to believe they may have been left by this 14th century West African expedition, Veall still wonders whether they might not be of earlier origin. While it is commonly held that the Manding System originated not long before the time of Abubakari, Winter has suggested the system’s origins may be much older—thousands of years older.

The inscriptions along the coast also seem to Veall to vary, suggesting multiple sources and thus perhaps multiple expeditions over a vast period of time. He continues to study the inscriptions and hopes other researchers will join his efforts. He wrote: “I have informed the Uruguayan Ministry of Education and Culture about this ground-breaking ‘discovery.’ The Ministry subsequently replied that they had no knowledge of such sites and most probably the location was incorrect. A sketch map with the satellite co-ordinates has been sent to the Ministry confirming the Uruguyan location is correct. A reply is still awaited.

“However, of greater urgency, the satellite imagery also confirms a rapid deterioration of the coastline archaeological sites due to residential intrusion and heavy tourist erosion.”