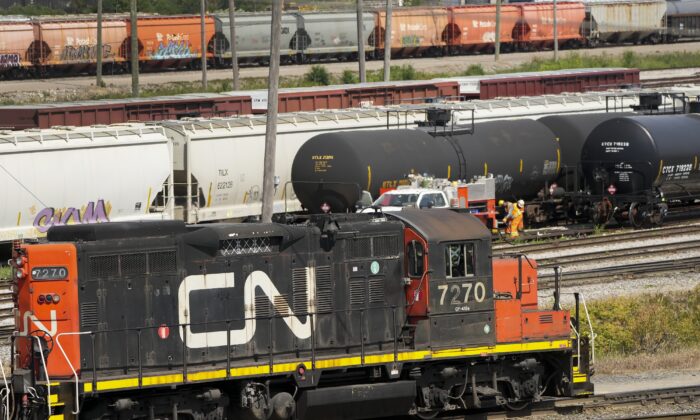 People who are affected by Canadian National Railway’s vaccine mandate and are suing the company have started speaking out and releasing internal documents, one of which is a recording showing CN knew some of its employees were experiencing debilitating reactions to COVID-19 vaccination before it implemented the mandate.

Christian Jones, a key lawsuit organizer against CN, commented on the recording and said it was “insane” to think imposing the mandate was proper given what management knew.

Jones was a real estate manager for CN before being put on unpaid leave and then dismissed for refusing to disclose his vaccination status.

He says the company should have pushed back against the mandate imposed by Transport Canada in fall 2021.

The recently obtained recording relates to a virtual meeting that took place three days before Nov. 15, 2021, when CN’s vaccine mandate kicked in.

Various executives, managers, and human resources personnel discussed the policy and how to manage potential issues like unvaccinated employees attending their workplaces against the directive and making a scene, or vaccinated employees still catching COVID.

One meeting participant asked if an employee who falls ill after the second dose of a COVID-19 vaccine would get paid leave.

“That will continue to be managed like any other day-off under their agreement,” replied Yaritza Kon, director of human resources.

Rahim Karmali, chief engineer for supply chain and technology, was moderating the meeting and commented on Kon’s response based on his experience.

“I’ve had employees get severe reactions after the shot,” said Karmali, who reports to a vice president, explaining that these issues can be managed through the safety representative.

“But it’s not ‘Hey, I feel a little bit feverish.’ It’s ‘Hey, I’ve got something to the point where my body is unable to function. I’ve got muscle contractions’ and things like that. There’s documented symptoms that we will support for those types of issues when they do arise.”

Jones said he’s concerned by these comments based on the number of employees Karmali manages.

“That’s a huge percentage when compared to the 99.9 percent survivability rate associated with COVID-19 or even its severe cases,” he said.

Jones then noted the language used by Karmali where he said “when they do arise” instead of “if.”

“This is a guarantee from management that a large percentage of people who take these shots will have a severe event.”

“Simply, it’s insane to think this is a reasonable policy,” Jones said.

The Epoch Times attempted to reach Karmali but didn’t hear back. His identity was confirmed through a former CN employee and online profiles.

CN was also contacted to comment on the recording and to indicate if it kept statistics on adverse events caused by vaccination. The company was also asked how many employees were fired or quit because of the mandate. CN spokesperson Jonathan Abecassis declined to comment.

There is evidence the vaccine mandate had a negative impact on staffing at major railway companies.

A June secret briefing given to the Liberal cabinet before it made the decision to suspend the mandates said it was the most important factor impacting human resources.

“Class 1 railways are running with lower employment levels than a year ago: citing vaccination mandate as key impediment to staffing for critical operating positions like engineers and conductors, and maintenance—both in terms of keeping former employees on sidelines and making it difficult to recruit,” says the briefing.

According to Blacklock’s Reporter citing labour board records, Canadian Pacific (CP) didn’t impose too strict of a mandate to keep its trains running. CP said full compliance would “place critical operations of the railroad at risk.”

Some managers on the CN videoconference call expressed concerns about what the impact of the mandate would be on staffing.

One unidentified speaker said it was impossible to predict how many employees would not show up on Nov. 15.

“None of us really understand what the full impact of this will be,” he said. “We’ll make sure your track is protected properly, I can tell you that.”

The CN mandate fell after Ottawa suspended the mandates for domestic travel and federally regulated workplaces on June 20.

CN’s report on second-quarter results released in late July addresses the mandate, noting it led to the vaccination of “substantially all active CN employees.”

What the report doesn’t say is that hundreds of CN employees were put on unpaid leave, were fired, or quit due to the mandate.

About 200 of them have launched a lawsuit against the company and more employees have started a second lawsuit. CP is also being sued.

The CN plaintiffs are each seeking $500,000 in damages for charter rights violations and another $500,000 for punitive and exemplary damages.

They claim loss of income, loss of sleep, emotional trauma, and loss of opportunity for future income, among other things.

Their statement of claim says the plaintiffs oppose attesting to their vaccination status and accepting vaccination absent informed consent.

Internal emails obtained by The Epoch Times show Jones challenged CN’s mandate policy and asked that it be revoked.

“The alternative starts with a very expensive formal letter from my growing team and I,” wrote Jones on Oct. 13, 2021.

“‘I’m going to bring an army after you,’” Jones says he told his management. “Obviously they didn’t believe me.”

The parties held a case management conference on Sept. 7 and the judge set April 2023 as the date of hearings to consider CN’s and CP’s motions to strike the lawsuits.

Transport Canada and the attorney general have pulled their own motion to strike.

“The issue of whether the Federal Court has jurisdiction over Canadian National Railway and Canadian Pacific Railway will be determined before Canada brings any motion to strike,” Transport Canada spokesperson Hicham Ayoun said in an email statement.