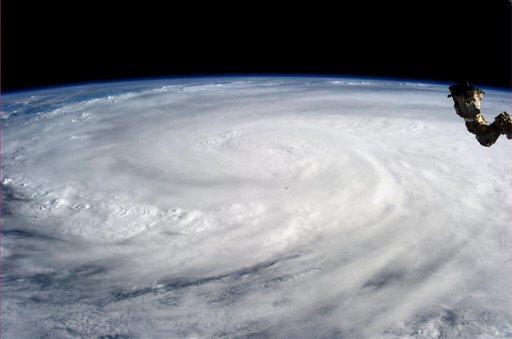 An American astronaut took an unbelievable photo of Typhoon Haiyan from the International Space Station.

Easily besting radar images, the photo shows the menacing yet picturesque clouds swirling above the Earth, while the typhoon wreaked havoc below.

The central Philippine city of Tacloban was in ruins Saturday, a day after being ravaged by one of the strongest typhoons on record, as horrified residents spoke of storm surges as high as trees and authorities said they were expecting a “very high number of fatalities.”

At least 138 people were confirmed dead in the aftermath of Typhoon Haiyan. But Philippine Red Cross Secretary General Gwen Pang said that agency field staff in the region estimated the toll was about 1,000. Pang, however, emphasized that it was “just an estimate.”

The astronaut who took the picture, Karen Nyberg, regularly shares photos via Twitter, but is slated to leave the space station in several days.

[View the story “Leyte Hit by Typhoon Yolanda” on Storify]