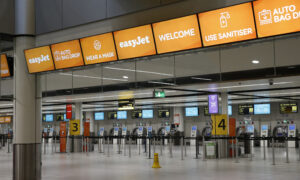 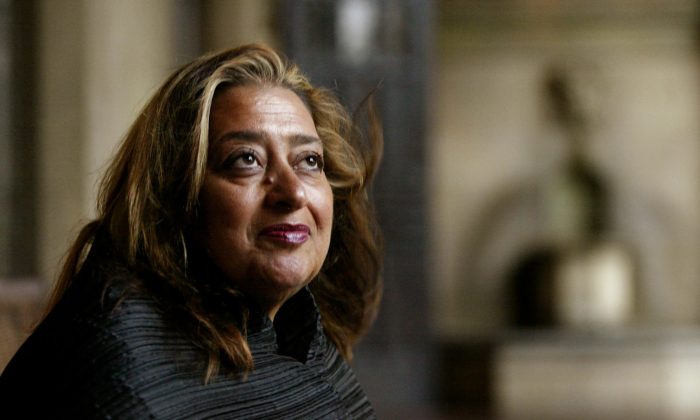 LONDON—Iraqi-British architect Zaha Hadid, whose modernist, futuristic designs included the swooping aquatic center for the 2012 London Olympics, has died at age 65. She leaves a string of bold and sometimes controversial buildings around the world.

Hadid’s firm said she died on March 31 in a Miami hospital. She had contracted bronchitis earlier this week and had a heart attack while being treated.

In London, where she lived and worked, Mayor Boris Johnson tweeted that “she was an inspiration and her legacy lives on in wonderful buildings” at the Olympic park and around the world.

Born and raised in Baghdad, Hadid studied mathematics at the American University of Beirut before enrolling at the Architectural Association in London in 1972.

She worked for the groundbreaking Dutch architect Rem Koolhaas before setting up London-based Zaha Hadid Architects in 1979.

Hadid’s work fused her knowledge of mathematics and embrace of computer technology with soaring imagination and ambition.

Uncompleted works include one of the stadiums for the 2022 World Cup in Qatar and a new Iraqi parliament building in Baghdad.

Her buildings were always talking points, and sometimes controversial. The Dongdaemun Design Plaza in Seoul was compared by detractors to an ugly spaceship that had made an emergency landing. Last year the Japanese government revoked her commission to build the stadium for the 2020 Tokyo Olympics amid spiraling costs.

Uncompleted works include one of the stadiums for the 2022 World Cup in Qatar and a new Iraqi parliament building in Baghdad.

Hadid twice won Britain’s Stirling Prize for architecture and in 2004 became the first woman to win the Pritzker Prize, known as the “Nobel prize of architecture.”

The Pritzker jury praised her unswerving commitment to modernism and defiance of convention.

Ronnie Corbett, Half of Comedy’s ‘Two Ronnies,’ Dies at 85

Like all architects, Hadid sometimes struggled to have her ambitious designs built. She acknowledged that some of her early plans had posed engineering challenges.

“I used to like buildings floating,” Hadid told the BBC last month. “Now I know that they can’t float.”

She was also unremittingly blunt and forthright—qualities not always relished in British society.

Earlier this year she was awarded the Gold Medal by the Royal Institute of British Architects. Architect Peter Cook said in his citation that “in our culture of circumspection and modesty her work is certainly not modest, and she herself is the opposite of modest.”

Architect Intrigued by Harmony and Design in Shen Yun

“Such self-confidence is easily accepted in filmmakers and football managers, but causes some architects to feel uncomfortable,” he said. “Maybe they’re secretly jealous of her unquestionable talent.”

Although Hadid said she felt something of an outsider in British architecture—a woman, a foreigner and an innovator—she was made a dame, the female equivalent of a knight, by Queen Elizabeth II in 2012.

“I’m not against the establishment, per se,” she told the BBC. “I just do what I do and that’s it.”