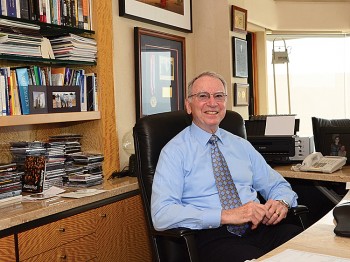 LA JOLLA, Calif.—Dr. Irwin Jacobs, the founder and former chairman of San Diego-based wireless communications giant Qualcomm Inc., has a lot to be proud of.

“It continues to amaze us that things have been so successful, that we’ve been able to meet so many interesting people, and have been able to help a lot of people,” the 77-year old retired chairman said in his home in suburban San Diego, in an interview with the Epoch Times.

While Qualcomm isn’t a household name outside of Southern California, its technologies and products are used worldwide.

A pioneer of the CDMA wireless technology used in roughly half of the nation’s wireless phones—with Verizon and Sprint—Qualcomm is a leader in wireless technology. Its Snapdragon processor for smartphones is used in many leading devices, including the Google Nexus One, HTC Droid Incredible, and the HTC Thunderbolt.

Qualcomm—with annual revenues of $11 billion—wouldn’t have seen the light of day if not for Jacobs’ wife and a particular rainy New England afternoon.

Growing up in Massachusetts and after receiving a doctorate in engineering, Jacobs took a job at the Massachusetts Institute of Technology. “We had been looking for a house in Boston, and when I came home that evening, my wife read me a very nice description of a home. I said, ‘Let’s go look at it.’ She said, ‘There’s only one trouble: it’s in La Jolla.’”

Jacobs moved to Southern California in 1966 and began a career as a professor at University of California at San Diego, at the time a relatively new institution. He split his time between teaching, research, and running a satellite technology company called Linkabit, which Jacobs founded with a few colleagues.

Jacobs shepherded the firm to an eventual merger with M/A-COM in 1980. Today, Linkabit is part of L-3 Communications.

Qualcomm didn’t see its inception until 1985.

Computing and digital communications was a nascent technology in the mid-1980s, and like founders of many other leading technology firms, Jacobs saw its potential to change the lives of consumers.

“We wanted to continue to try to innovate new products like we had done at Linkabit, not just make a small change, but make a much larger change,” he recounted.

“Within about 4, 5, or 6 months, we came up with several ideas that have kept us busy ever since, one of which was code division multiple access, or CDMA.”

At the time, time division multiple access (TDMA) was the dominant channel access method in digital transmission, allowing multiple stations to share the same transmission channel such as a radio frequency. TDMA is used in 2G wireless communication technologies such as GSM (global system for mobile communications), and iDEN (integrated digital enhancement network, which was developed by Motorola).

“We originally came up with that idea while working on a consulting activity with Hughes Aircraft . They had asked for our support on a proposal they had submitted to the FCC for a mobile satellite communications system,” Jacobs said.

“After the second meeting with them in Los Angeles, while driving back down to San Diego, I realized that perhaps CDMA might be a better solution than the more standard time division or frequency division approaches.”

While Qualcomm originally looked to develop CDMA for satellite communication, it later focused the technology for cellular networks.

The industry was ready to embrace TDMA as the next generation wireless standard, and while the small San Diego-based company and its CDMA technology had its proponents, many were not convinced that it could have commercial success.

“We worked day and night, and invited everybody back again in early November for a demonstration here [in San Diego] for a prototype of a CDMA system,” Jacobs recounted.

But a certain trust in their work kept Jacobs and his engineers going back to CDMA. “Persistence, that is patience, in developing an idea,” helped launch the technology, Jacobs shared.

“We did show that the problems that people had encountered and thought they couldn’t solve, that we had very good solutions for those problems, and that with those solutions, CDMA would perform much better than TDMA.”

A New Standard Was Born

Needing for funding to continue research, Qualcomm signed licensing contracts with manufacturers—an unusual approach at the time—whereby manufacturers would provide funding in advance, and Qualcomm would receive a portion of proceeds for each sale of devices based on CDMA-technology.

“First, AT&T signed up, and later Motorola, and several other companies, including Nokia at one point,” said Jacobs.

The rest, as they say, was history. CDMA went on to become a major global wireless communications standard—along with GSM—and Jacobs spent much of his time in the 1990s and early part of 2000s traveling to different markets and promoting the technology to wireless companies.

As the wireless industry took off, so did Qualcomm. It began making cellular components, chips, and processors, and became a dominant player in the 3G mobile standard, possessing a slew of 3G-related patents.

In the second quarter of fiscal year 2011, CDMA technology product sales accounted for around 53 percent of Qualcomm’s revenues, while royalties were 45 percent of total revenues. “The popularity of QCOM’s Snapdragon chipset will give it an advantage as media-centric wireless devices become more popular,” analysts at Standard & Poor’s said in a recent research note.

Today, the company is continuing to innovate, including WCDMA technologies and 4G cellular standards. It is the leading manufacturer of fabless chips, utilizing several independent semi- conductor foundries to manufacture its semiconductor products.

“Innovation, we often think of it in terms of engineering, but one can also innovate just about everything that you do, particularly in the case of a company, you try to encourage those who are in manufacturing, in accounting, in testing, in a variety of ways, in supporting in sales and marketing, to not just do things the same way, but to think about how can we do things better.”

He added, “There’s always ways to approach innovation, and we try to encourage it.”