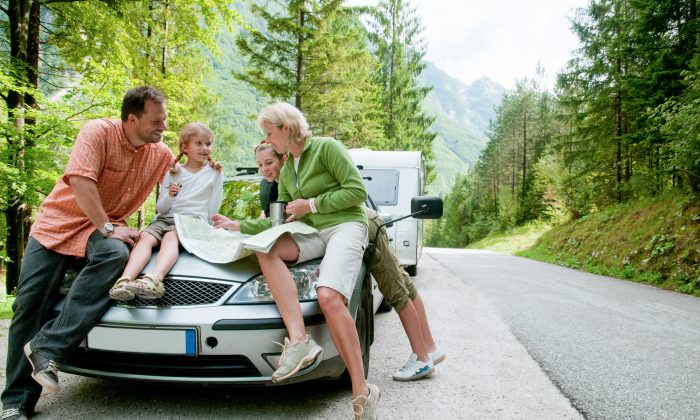 Inner Compass: Finding My Way Home in the Age of GPS

If you run a needle through your hair 100 times, the needle will take on a magnetic charge. Then you can find a leaf, and set it gently on the surface of a pool of water. Ever more gently, so as not to sink the leaf, you can place the needle on top. In the absence of wind, the heavy end of the needle, with the eye, will align itself to the magnetic north.

From there, you can chart your course. If, that is, you find yourself lost, without a compass or a GPS.

Ralph Waldo Emerson said, “The civilized man has built a coach, but has lost the use of his feet.”

In the early 1960s, heading toward an intended destination meant using maps, or getting directions from someone via phone call and writing them out on paper.

In my mother’s case, this meant anything paper-like, and at least partially blank, within reach of where she was most likely stirring something at the stove or madly sewing buttons on the dresses we were meant to wear for the occasion.

The phone would be wedged between my mother’s cheek and shoulder, its cord stretched straight beyond its curls. Spoon or sewing needle in one hand, she would peg the slip of paper to the nearest available surface with the other, and while doing so, somehow manage to write down all pertinent route numbers, names of streets, and a specified number of traffic lights to go through.

Getting a family of seven out the door, often with the addition of our German shepherd, was a feat unto itself.

Once in the station wagon, our father took the wheel. One of us sat in the far back, the other three and our grandmother took the middle seat, and my mother sat in the front, with the dog at her knees. Here, she would excavate her hastily packed purse for the bits of scrap paper or envelope that held the clues to our destination.

My mother also had the gift of challenging the capacity of an hour well beyond its limits, so my father would have started driving while the rummaging ensued. We were generally behind schedule anywhere from a wee bit to a monumental amount. Between the searching and deciphering, she would also be putting in the final stitches on a dress.

All the information was there to get us to where we had to be. We simply lacked the intricate, navigational equipment needed to connect the script, which often ran in straight lines, getting ever more condensed as it approached the very bottom of the piece of paper, where it continued in circles around its edges, traveling eventually onto the other side, leaving no area unfilled. And when that ran out, there was that other piece, which hadn’t been recovered yet.

When all appeared to be found and the dress was complete, she would nod off quietly, with her chin to her chest. My father would sing his version of “MacNamara’s Band” and play word games with us, while our grandmother gently laughed along. And all was well in the wagon.

Until we realized we weren’t where we were meant to be at all.

My mother would be awake now, tracking through her notes from the beginning to end, in reverse and back again, to no avail. This usually marked the delicate turning point when the family trip became a somewhat combustible adventure.

Would a GPS have helped? It would have brought us from point A to B efficiently, perhaps. But even without one, we always arrived at our destination at some point, dressed in clothes handsewn with love, and, in many ways, wiser than we started out.

These excursions coursed the very real and sometimes bumpy roads of human interaction, from which we learned to draft our own internal maps, in time. Navigating avenues of communication, love, and forgiveness within the complexities of the nuclear family, we learned to find our bearings later, in the larger world.

‘Sometimes you find yourself in the middle of nowhere … ’

I took a drive this morning. The sun had broken on a woken world. Its rays stretched through the window just so—its beams fell across my notebook, spreading across the few sentences that had made it to paper. The pen I held threw a distinct, dividing shadow down the page, cutting the words even further off from each other than they had been already. Words that had been pulled with effort from the tangle in my head, continued in their struggle to connect cohesively, blankly staring up from their communal sunbath.

So I left them as they were and got into the car, taking my favorite CD and leaving the phone on the shelf by the door. No direction, no plan but to clear the agenda. Because the agenda had lost sight of the goal, and the plan laid out to correct that had gotten lost in the shuffle.

“If you do not change direction, you may end up where you are heading,” Lao Tzu said.

Heading north on NY-22, I saw a flock of Canadian geese flying with a tailwind in a purposeful “V” through the clear blue of the sky above. And from that point, whatever turn felt right, I took.

Roads became unfamiliar, distances between the houses grew. Partially tended yards gave way to fields that stretched in unfulfilled objective all the way to a tired barn, long since collapsed into itself. A random piece of farm equipment held it in a tired, defeated gaze from where it lay not far off, tilted to its side, with wheels half-sunken in a furrow.

And so it went, until an hour or so later, at which point the knot at my chest dissolved. A few miles further, my head was clear and I felt lighter at the center. I was ready to turn back.

‘ … And sometimes in the middle of nowhere, you find yourself’

This wasn’t exactly the middle of nowhere, by rural standards. I was not monumentally lost. But by placing myself at any level into the unfamiliar, without the convenience of devices and their tempting stream of information telling me what to do, where to go, and how to get there, I felt my inner compass gently leading me again.

And I found my way home, both literally and figuratively.

The fact that I could only hear it by switching off all the noise of external information wasn’t lost on me. It had been knocking at the door of my heart and quietly giving me directions all along.

Over the house, another flock of wild geese drew through the sky. I put my hand to the doorknob. The swelling, melodious sound of their call diminished slowly, as an invisible, primal, cord pulled them north, beyond the hill.