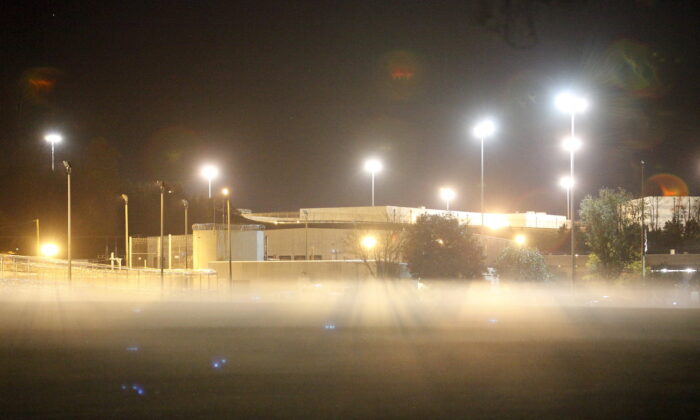 Fog drifts across a field in front of one of the two medium-security prisons inside the Federal Corrections Complex in Butner, North Carolina, on Nov. 20, 2015. (Reuters/Jonathan Drake)
Crime and Incidents

WASHINGTON—A convicted drug trafficker serving a 5.5-year sentence is facing new charges after escaping from a federal prison in North Carolina, claiming that he feared contracting COVID-19, the respiratory illness caused by the CCP virus.

Robert Higdon, the U.S. attorney for the Eastern District of North Carolina, announced on Tuesday that Richard Cephas turned himself in on April 20 to a federal courthouse in Delaware, about 18 days after escaping from the federal prison complex in Butner, North Carolina.

In a video interview posted on the website of the News and Observer newspaper, Cephas said he was concerned about keeping himself safe during the COVID-19 outbreak at Butner.

“We didn’t have enough soap,” he says on the video. “We had no control over social distancing.”

In an interview with the newspaper, he also said: “I signed up for a jail sentence, not a death sentence.”

The federal prison system, run by the Bureau of Prisons, has been struggling to combat the spread of the CCP (Chinese Communist Party) virus, also known as the novel coronavirus.

The agency has reported that 22 inmates so far have died, five of whom were serving their sentences at the prison unit at Butner known as Butner 1. As of April 20, 497 federal inmates and 319 Bureau of Prison staff had been diagnosed with COVID-19.

U.S. Attorney General William Barr issued an emergency order on April 3 for the Bureau of Prisons that made it easier for some federal inmates to qualify for early release into home confinement in order to reduce the prison population.

It is not clear whether Cephas could have potentially qualified for home confinement under the criteria spelled out.

“Mr. Cephas is a convicted drug trafficker who was sentenced to federal prison for his role in a wide-ranging drug conspiracy which imported cocaine and methamphetamine into the United States from Mexico,” Higdon said in a statement. He called Cephas’ escape from prison “nothing more than an opportunistic move to use the coronavirus pandemic as an excuse to cut his prison term short.”

According to prosecutors, Cephas hatched his escape as early as March 30. He escaped on April 1 and called his wife, saying, “I just want to save my life, that’s all.”

Cephas’ escape was discovered the following day when prison staff conducted a headcount.