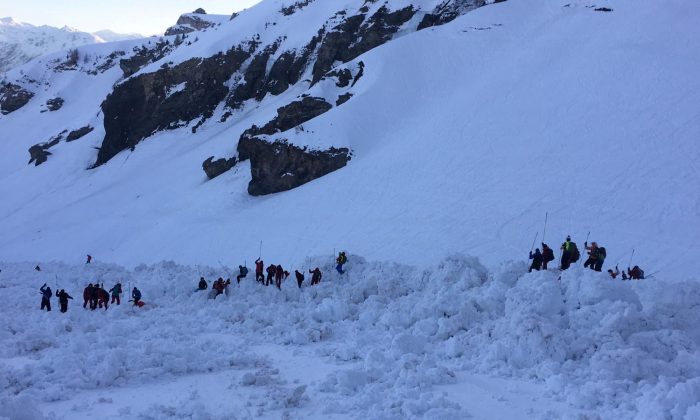 The site of an avalanche is pictured in Crans-Montana, Switzerland, Feb. 19, 2019. (Police Cantonale Valaisanne/Handout via Reuters)
Europe

CRANS-MONTANA, Switzerland—A major avalanche buried skiers on a busy slope of the Swiss resort of Crans-Montana on Feb. 19, injuring four people including one whose life is in danger, but there are no known fatalities so far, officials said.

Eight helicopters, 12 dogs and more than 240 police, rescuers, and soldiers, worked to find any more people enveloped in the snow as night fell.

“Rescuers arrived very quickly on the scene, they rescued four injured people including one whose life is in danger, and three were injured more superficially,” Valais cantonal police commander Christian Varone told a news conference.

“Witnesses told us there could be more people buried under the snow, that is why we are pursuing the search with considerable means.”

He said the avalanche was 840 meters (yards) long and 100 meters wide, with 400 meters of heavy snow hitting the piste.

Frederic Favre, head of the Valais department of police and justice, said no one was known to have been killed.

Earlier, the Nouvelliste, a local newspaper, quoted the commune’s president Nicolas Feraud as saying 10 to 12 people were believed to be trapped.

The avalanche, in mid-afternoon, came after a week of warmer temperatures began melting heavy snow. But the Swiss Institute for Snow and Avalanche Research said the danger for the area had been only at level two on a scale of five on Feb. 19.

Prosecutor Catherine Seppey said that an investigation had been opened. “There are two hypotheses. The first is that several skiers set off the avalanche. The second hypothesis is it was a spontaneous avalanche due to climatic conditions, and in that case it will be a question of determining responsibilities and problems of security,” she said.

Philippe Magistretti, president of the Crans-Montana ski lift company, told Reuters by telephone that army personnel who were in the resort had joined the rescue effort.

“The amount of snow is incredible, two meters deep and 300 meters long. It’s a spring avalanche which is very compact,” the Nouvelliste quoted one unnamed rescue worker as saying. Rescue dogs had not found anyone during a first search, he added.