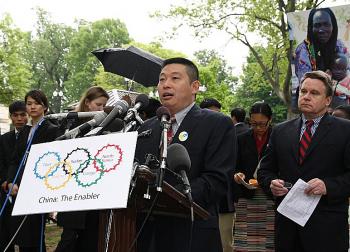 
On August 6, two days ahead of the opening ceremony for the Olympic Games, Yang Jianli and other democracy activists were denied entry into Hong Kong. Regarding this incident, Yang Jianli wrote the following statement.

At about 3:00 p.m. this afternoon, Chinese authorities denied me entrance into Hong Kong. From Hong Kong, I had planned to take a train to the earthquake struck area in Sichuan Province. The purpose of my visit was to help victims of the disaster build an earthquake-proof elementary school according to standards suitable for buildings in an earthquake zone. The funds for this project were donated by overseas Chinese living in the United States.

I am a Chinese citizen and hold a valid Chinese passport. According to Article 12 of the International Covenant on Civil and Political Rights (ICCPR)—the United Nations treaty that China signed in 1998, I have every right to enter my country. No one shall be arbitrarily deprived of the right to enter his own country.

Some of you may remember that six years ago, I entered China using a friend’s passport because I participated in the peaceful rally for democratic reforms at Tiananmen Square in 1989, and my passport was not renewed by the Chinese government. I was then arrested and sentenced to five years in prison for the absurd charge of espionage.

I refused early release several times in order to obtain a legal Chinese passport. After serving the full sentence, in April 2007, I was released from jail and traveled freely in China for several months until I went back to the United States last August.

This March, I also entered to Hong Kong without incident.

Whatever reason the Chinese government might give this time for not allowing me back into my own country, it certainly has no ground in either Chinese or international law. This action by the Chinese regime, however unlawful, was certainly not unexpected—my name is only one of the thousands on the regime’s blacklist.

I know the real reason that my countrymen and I were just deprived of our right to return to our home country: it is because we recognize our freedom of speech, freedom of religious belief, freedom of assembly and so on; and because we urge the Chinese government to return these freedoms back to Chinese people. Ever since 1989, the Chinese Communist Party (CCP) has employed the practice of barring Chinese citizens like me from entering the country.

We just wanted to express our sympathy and love to our compatriots at the earthquake disaster areas, but the CCP has deprived us of this opportunity. Now, unfortunately, we have to postpone our project there. The CCP has deprived us of our right to traveling to our own country and they have also prevented the earthquake victims from receiving much needed aid. The true nature of the CCP reveals that the Olympic slogan “One World, One Dream” serves to fool the people of the world and cheat the citizens of China.

Note: [1] Yang Jianli is the founder and president of Initiatives for China, an organization seeking to promote democracy in China, headquartered in Boston.

Read the article in Chinese .