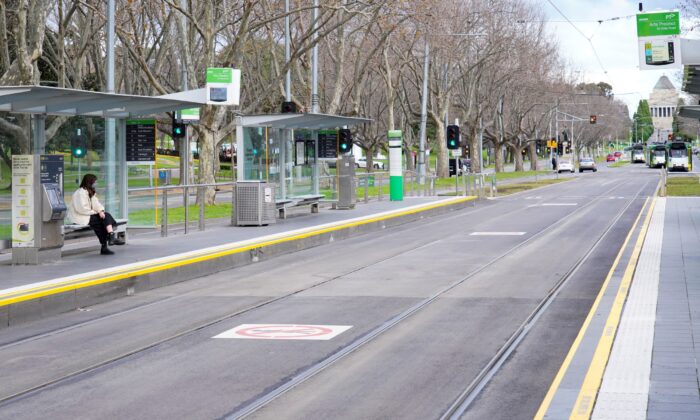 A lone passenger sits at a tram stop on a mostly-empty city center street on the first day of a lockdown as the state of Victoria looks to curb the spread of COVID-19 outbreak in Melbourne, Australia, on July 16, 2021. (Sandra Sanders/Reuters)
Australia

Glass’s report, released on Dec. 7, stated that from Jul. 9 to Sep. 14, the Ombudsman received 315 complaints from jobless stranded Victorians who were paying double rent, caravanning pensioners without the internet being asked to provide documents they did not have, and a farmer who feared having to put down her animals.

The ombudsmen said that the system led to some of the “most questionable decision” she had ever seen during her seven years in the job.

“It appeared to us that the department put significant resources into keeping people out rather than helping them find safe ways to get home,” Glass said.

She called upon the government to publicly acknowledge the distress the system caused, improve policy and guidance for such schemes.

“If there is a next time, we cannot let this happen again,” she said.

From Jan. 11, 2021, Victoria has operated under a traffic light system where every person wishing to enter the state was required to get a permit. Those without permits needed exemptions or had to be an ‘excepted person.’

Additionally, different areas of Australia were categorised as green, orange or red zones based on the level of COVID-19 activity in the regions. Travellers returning from green and orange zones apply for an automated permit online, whilst those from red zones are not entitled to a permit or to travel to Victoria unless covered by an exception or exemption.

However, the evidence needed for the exemptions was extensive and, at times burdensome. It included statutory declarations, proof of residence or ownership of animals, letters from medical professionals, financial statements, and statements of relationship to people who were dying. So much so that out of  33,252 applications submitted for exemptions, only 8 percent were accepted at the time of the investigation.

This was also despite many applicants being fully vaccinated against COVID-19 and returning negative COVID-19 tests.

“We just want an exemption to be”with our dying daughter,” one family stated to the ombudsmen. “She is terminal, palliative and end of life. We are being treated inhumanly.”

Another found the process “dehumanising and humiliating”; they had to constantly book appointments with their doctors to get more and more paperwork vouching for the severity of their mental “health and even had to call and threaten self-harm to feel like they were taken seriously.

Glass, in her report, said that the overwhelming majority of applications were “not specifically rejected but ‘closed for other reasons” and noted that most of the applications did not get to a decision-maker at all. This was despite exemption staff being scaled up from 20 to 285.

However, she noted that the bureaucratic measures taken to handle the permits were deeply flawed, with staff expected to categorise and prioritise 50 applications per hour, with an average processing time of 30 seconds per application.

“The effect of a complex and constrained bureaucracy meant some outcomes were downright unjust, even inhumane,” she said in the report.

“People felt caught up in a bureaucratic nightmare.”

The report also found significant variations in the amount of exemptions granted by the Deputy Chief Health Officers and directors of the COVID-19 Response Division with  77 percent of the cases looked into by the DHOs granted a permit, compared to only 23 percent of those assessed by a director.

“Those with medical training were certainly more likely, plainly, to take into account public health risks in a potentially more proportionate way,” the Ombudsmen said.

The Victorian government maintains the “extreme risk” zone declaration was made to safeguard Victorians from the Delta variant.

“The restrictions were necessary to protect all Victorians from risk—particularly as only 17 per cent of Victorians 16 years and older were fully vaccinated at the time,” a government spokeswoman told the ABC.