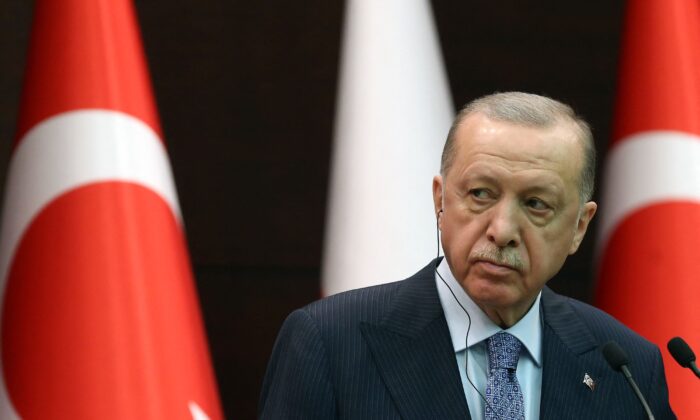 Inflation in Turkey hit a 20-year-high in April as the country continued to battle rising rates, further exacerbated by the conflict in Ukraine and supply chain issues, according to data published by the Turkish Statistical Institute on May 5.

Consumer price inflation soared to 69.97 percent per year in April, and 7.25 percent monthly, driven by high global energy prices and the weakening lira.

A Reuters poll forecast annual consumer price inflation to be 68 percent and monthly at 6 percent.

The surge in consumer prices was driven by an annual 105.9 percent increase in transportation, and an 89.1 percent jump in food and non-alcoholic drinks prices, the data showed, while furnishings and household equipment jumped 77.64 percent.

Communication, clothing and footwear, education, and health saw the lowest increases, according to the data, although the increases were still felt in large cities such as Istanbul, where many are now turning to local discount markets to purchase cheaper garments.

Month-on-month, food and non-alcoholic drink prices rose the most at 13.38 percent as supermarkets are consistently being forced to change their prices on an almost weekly basis, while house prices rose 7.43 percent.

In recent months, properties in less affluent areas of Istanbul have increased substantially in price, and many, including the wider ex-pat community in the city, have instead resorted to renting out rooms in shared houses.

Apartments that were previously rented to tenants for around 4,000 Turkish lira ($270) this time last year are now upwards of 9,000 lira ($605), meaning that many of them remain empty despite increased demand.

Elsewhere on Thursday, official data showed that the domestic producer price index climbed 7.67 percent month-on-month in April for an annual rise of 121.82 percent.

Despite Turks feeling the pressure as the country reaches its highest level of inflation since early 2002, President Recep Tayyip Erdogan and his ruling party have continued to put pressure on the central bank to cut interest rates several times and fired those who resisted, thus further weakening the lira.

However, opponents and economists argue that lowering interest rates will only lead to higher inflation, and given that Turkey’s economy is reliant on imported goods in multiple sectors like energy and raw materials, Erdogan’s policy has translated to further pressure on consumer prices, despite tax cuts on basic goods and government subsidies for things like electricity bills.

Central bank Gov. Sahap Kavcioglu last week said annual inflation will peak at around 70 percent by June before declining to near 43 percent by the end of the year and single digits by end of 2024.

Disinflation will begin in the next few months “thanks to a gradual decrease in supply-demand mismatches and disruptions in supply chains, in addition to the results of the steps taken for price stability,” Kavcioglu said.

The central bank governor also noted that inflation was being further exacerbated by the ongoing war in Ukraine, and tightened COVID-19 restrictions in China which have further impacted the supply chain, stating that inflation would decrease gradually with monetary policy and the restoration of “global peace.”

He also said that tourism is expected to increase in Turkey this year. Visitors from Russia and Ukraine are the most popular each year to NATO member Turkey, which shares a maritime border with Ukraine and Russia in the Black Sea.

Erdogan, who has opposed the multiple Western sanctions imposed on Moscow over the invasion, has called on both sides to come to an agreement regarding a ceasefire.