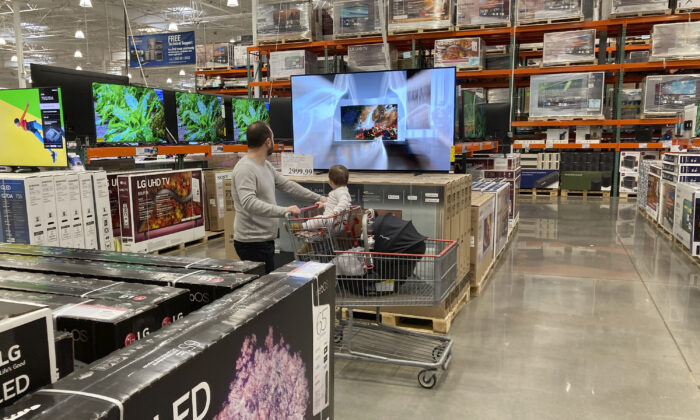 A shopper pushes a child in a cart while browsing big-screen televisions on display in the electronics section of a Costco warehouse in Lone Tree, Colo., on March 29, 2022. (David Zalubowski/AP Photo)
Inflation

Middle-class consumers in the United States have begun to overtake low-income shoppers as the financial group most affected by rising grocery prices for the first time since the pandemic, according to a May 31 report by Numerator, a consumer data analytical service.

Lower-income Americans making less than $50,000, were the first to be hit with rising inflation over the past year with a surge in prices for grocery budgets.

Higher inflation rates normally hit lower-income families hardest, as they tend to spend a larger proportion of their budgets on food, energy, and housing costs.

The report showed a narrowing of the gap between the two income groups in the week of May 8.

Middle-income households started to catch up to lower-income families in the week of May 15, with a 13.3 percent increase in the average price of their grocery expenses from 7 to 8 percent at the turn of the year.

“While all consumer groups have experienced a steady increase in prices over the past 52 weeks, select cohorts have been more heavily impacted, particularly Gen Z, black and low-income shoppers,” said Numerator.

“In recent weeks, many gaps between groups have closed slightly, bringing all consumers closer to the same level of impact.”

“Consumers are paying more for grocery, household, and health & beauty items than they were last year. While the rate of inflation for both health & beauty and household products has slowed or declined in recent weeks, grocery prices continue to rise,” said the report.

Suburban consumers have witnessed higher increases in their grocery bills compared to most urban and rural consumers, with an uptick in prices since last week.

Health and beauty prices were up 10.1 percent from a year ago.

“While this is down from inflationary rates seen in late 2021 and early 2022, it is slightly above rates seen earlier in 2021,” said Numerator.

Prices for household items were up 15.8 percent from 2021, an uptick from earlier months and which has been increasing since the turn of the year.

High inflation and gas prices this summer may discourage middle-class Americans from dining out, spending time driving, or planning future vacations, according to an April CNBC poll.

However, this has not discouraged Americans from wanting to spend on experiences, as the overwhelming majority of those polled according to a May 25 survey by the American Hotel & Lodging Association, still intend to travel over the next three months.

Middle-class households, who tend to shop at big-box stores such as Target and Walmart, and including dollar stores, are facing higher grocery costs due to recent price hikes at the major store chains, said a Numerator spokesperson to MarketWatch.

Big box retail stores have been reporting weaker than expected earnings and may even start discounting items after being stuck with excess inventory, according to Business Insider.

Meanwhile. warehouse club networks such as Costco and Sam’s Club, continue to see the lowest price increases in groceries in the big store circuit, with a 7.3 percent rise in prices over the last year, according to Numerator.

Numerator said that its data showed that middle-class shoppers were starting to spend more on groceries at dollar stores such as Dollar General and Family Dollar, not just at the big box stores.

Online retailers such as Amazon and Instacart and dollar stores witnessed a major spike in grocery prices from last year, at 21.5 percent and 19.2 percent respectively, said the report.

Consumers were beginning to adapt their spending habits by cutting back on premium brands, said Douglas McMillon, the CEO of Walmart, on the company’s May 17 earnings call to investors.

Target’s CEO Brian Cornell also noted similar signs and that the store chain was dealing with “unusually high costs” in its first-quarter earnings call in May.

The two big box stores were hit with significant declines in earnings in the first quarter of 2022, mainly due to rising operational, fuel, and product costs.

The large retail chains have admitted that they will pass these increased costs on to consumers and will raise food prices, but reduce prices on general merchandise in order to alleviate pressure on their customers.

The number of job openings in big retail tumbled in April 2022, with job losses in the sector hitting 61,000 in May.