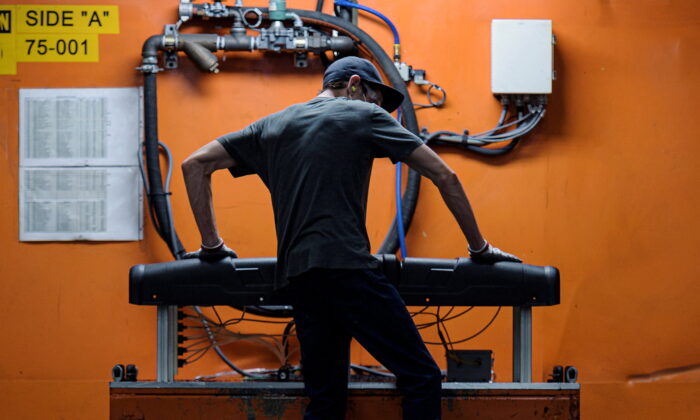 A person works at an injection molding station at the Polaris manufacturing and assembly plant in Roseau, Minn., on June 7, 2021. (Dan Koeck/Files/Reuters)
Economy

Inflation and the risk of a recession are the top concerns for U.S. companies in multiple sectors. These worries are beginning to weigh on overall operations, resulting in a slowdown in business activity and declining sentiment, according to numerous indices.

The National Federation of Independent Business (NFIB) Optimism Index highlighted in July that 37 percent of small-business owners reported that inflation was their most important problem, the highest it has been since 1979. Moreover, the monthly survey revealed that most owners are raising their average selling prices, and the net percent of owners anticipating real sales to be higher worsened.

“The uncertainty in the small business sector is climbing again as owners continue to manage historic inflation, labor shortages, and supply chain disruptions,” NFIB Chief Economist Bill Dunkelberg said in a statement. “As we move into the second half of 2022, owners will continue to manage their businesses into a very uncertain future.”

This coincided with the August IBD/TIPP Economic Optimism Index, which slipped to an 11-year low of 38.1 as consumers continue to be pessimistic about the economy as inflation erases wage gains. This could spell bad news for business conditions.

In this economy, it’s all about planning for the worst-case scenario and hoping for the best, says Mike Davis, founding partner of Olive Tree Ridge, a multi-strategy asset management firm.

“If I plan for the worst, that’s when I’m going to be having the greatest set of days coming up in the future because I can only be pleasantly surprised,” Davis told The Epoch Times, adding that no matter how this economy is labeled, businesses still need to navigate through the information, storm clouds, and evolving consumer trends.

Federal Reserve officials haven’t shared the private sector’s pessimism, asserting that the institution can get inflation under control and potentially achieve a soft landing for the U.S. economy. At the same time, Fed Chair Jerome Powell’s confidence has ostensibly diminished, as he warned in his recent Jackson Hole Economic Symposium speech that there will be “some pain” ahead in the economy.

“While higher interest rates, slower growth, and softer labor market conditions will bring down inflation, they will also bring some pain to households and businesses,” he stated in prepared remarks. “These are the unfortunate costs of reducing inflation. But a failure to restore price stability would mean far greater pain.”

Is this pain that Powell mentioned already being felt in the private sector?

In July, industrial production growth eased to 3.9 percent year-over-year, the worst pace since January. Manufacturing output also dipped to an annualized pace of 3.2 percent, down from 3.6 percent in the previous month.

The broad array of purchasing managers indexes (PMIs), which provide insight into the general direction of manufacturing and service sectors in the economy, has weakened.

Economists explained that higher interest rates and elevated inflation dampened customer demand. In order to bolster new sales, companies’ prices have been edging higher at the softest level in 17 months.

In July, Chris Williamson, a chief business economist at S&P Global Market Intelligence, noted in a comprehensive analysis of the state of worldwide manufacturing that business confidence “remained worryingly subdued” in the United States.

“The US #economy is contracting at a rate not seen since the global financial crisis in 2009 (excluding the initial pandemic lockdown), as the flash #PMI covering output of manufacturing and services fell sharply in July,” he wrote on Twitter.

That said, the Institute for Supply Management’s (ISM) manufacturing and non-manufacturing PMI prints were mixed.

Still, the private-sector PMIs have been hovering at pandemic levels.

In addition, the various regional Fed bank data have been discouraging for the national economy.

The Dallas Fed Manufacturing and Services Indexes plummeted to negative 22.6 and negative 10.9, respectively. In the Dallas Fed Survey, one respondent in the machinery manufacturing business is beginning to see activity subside.

“We are starting to see weakness in incoming orders,” the person told the regional central bank. “We are preparing for a further slowdown but hoping for the best.”

“This has more than reversed the temporary productivity jump we saw earlier on in the pandemic, when the economy was frantically trying to keep going despite a massive loss of workers,” CNBC host Kelly Evans said.

In today’s economy, companies are facing a broad array of challenges making it harder to maintain operations or bottom lines.

According to Patrick Stern, co-founder of Uncle Tim’s Cocktails, which sells bottled cocktails, transportation is a major challenge.

“Combined with the impacts of inflation, this ends up impacting our cost of goods,” Stern told The Epoch Times. The startup plans to raise prices heading into the busy holiday season.

According to Caitlyn Parish, CEO and founder of low-cost bridesmaid dress seller Cicinia, there has yet to be a significant decline in sales, but market conditions have become harder.

“It’s hard to maintain the same profits, quality of our products, and customer service with the rising cost of everything,” she told The Epoch Times.

Still, looking ahead to 2023, one of the firm’s top concerns includes keeping staffing levels intact.

“I have always had a very small core team focused on maximum business efficiency so I couldn’t lay off my employees if I wanted to. They are essential to our business success and I’d like to think that we would do everything to keep it that way in the future as well,” she said.

Inflation continues to be a chief worry for Rhett Stubbendeck, CEO of insurance company LeverageRx.

“My business has to pay more for rent and electricity bills. This is reducing the profits, making less money available for reinvesting into business operations,” he told The Epoch Times.

Should demand subside and the business stop generating enough profits, it would be difficult to cover its operating expenses, he noted.

A second-quarter CNBC CFO Council survey found that 68 percent of CFOs anticipate a recession in the first half of 2023. None of the chief financial officers surveyed believe the U.S. economy will avert an economic downturn, with inflation continuing to be companies’ primary external threat to their business operations.

How businesses respond to economic conditions will be interesting, Davis notes. He believes that businesses tend to have short-term memories, so they might become desensitized to the pain they felt from higher gasoline prices and labor costs.

As a result, private firms might try to spend a little bit more if they find their balance sheets can afford it and cost pressures diminish.

Ultimately, Davis says, it would come down to business owners making more informed decisions by reading beyond the headlines.