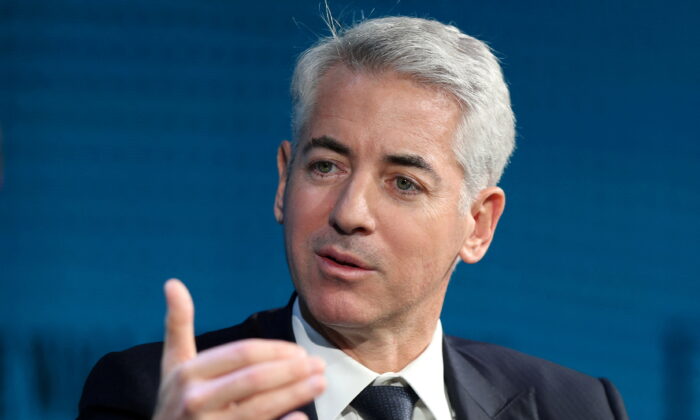 Hedge fund billionaire Bill Ackman has criticized the U.S. Federal Reserve for the way it has handled inflation, warning that the agency’s modest interest rate hikes won’t be able to control the uncontrolled increase in prices.

“Inflation is out of control. Inflation expectations are getting out of control. Markets are imploding because investors are not confident that the @federalreserve will stop inflation. If the Fed doesn’t do its job, the market will do the Fed’s job, and that is what is happening now,” Ackman, the founder and CEO of hedge fund Pershing Square Capital Management, said in a series of tweets on May 24.

Ackman, founder and CEO of Pershing Square Capital Management, said the only way to stop the “raging inflation” is by either adopting aggressive monetary tightening or through a “collapse in the economy.”

Considering the unprecedented number of job openings; an unemployment rate of 3.6 percent; long-term supply and demand imbalances in energy, food, housing, agriculture, and labor; as well as the wage-price spiral underway, Ackman said he believes “there is no prospect” for a material reduction in inflation unless the Fed aggressively raises interest rates or the stock market crashes.

Such a development would trigger an economic collapse and demand destruction, he added. The Fed raised interest rates by 50 basis points in May and has indicated that similar rate hikes will be announced at future meetings.

The activist investor slammed Fed officials for proposing “a modest increase in rates.” He believes the Fed has “already lost credibility” for having misread inflation.

Ackman pointed out that “there is no economic precedent” of 200 or 300 basis point rate increases successfully addressing the issue of 8 percent inflation with 3.6 percent unemployment.

The Federal Reserve’s current policy and guidance are setting up America for “double-digit sustained inflation,” he warned.

With inflation spiking in the past months, all major American stock indices have crashed so far this year. The Dow Jones Industrial Average is down 12.2 percent year-to-date as of May 25. The S&P 500 is down by 17.05 percent and Nasdaq has fallen by 27.78 percent during this period.

According to Ackman, the downward market spiral will end only when the Fed “puts a line in the sand on inflation” and commits to doing “whatever it takes” to control the price increases. The agency has to then demonstrate that it is serious about the issue by “immediately raising rates to neutral” and continue doing so until inflation normalizes.

In such a scenario, stocks will become cheap once more and markets will soar as investors become confident that the days of “runaway inflation” are over, he said.

The 12-month inflation rate in April 2022 was registered at 8.3 percent, only slightly lower than the four-decade high of 8.5 percent registered in March.

In an interview with The Wall Street Journal on May 17, Fed Chairman Jerome Powell said the central bank was committed to raising interest rates until inflation comes down. There will not be “any hesitation” about that, he added.