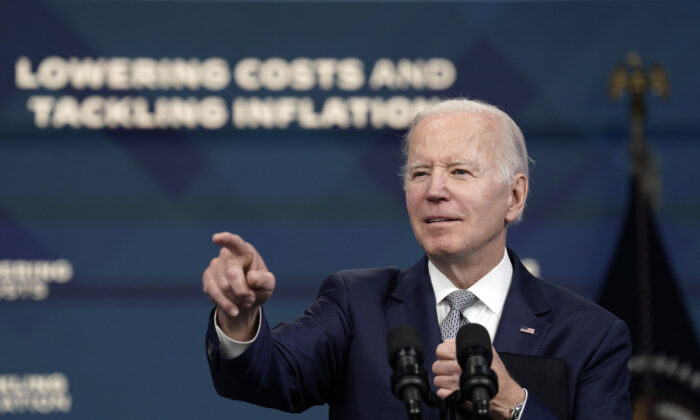 President Joe Biden replies to questions from the media after delivering remarks on inflation and lower costs for working families in the South Court Auditorium at the White House in Washington on May 10, 2022. (Yuri Gripas/Abaca Press/TNS)
Business Columnists

Inflation or Depression: Pick Your Poison

At last, we have something that really brings the American people together: inflation. Everyone hates it. It’s the whole topic of conversation at stores, on streets, at the park, or any setting. Want to make a friend? Just walk up to anyone and start complaining about prices. They will join right in and off you go. New besties.

The inflation problem is roiling American life in every respect. It’s wrecking financial planning. It’s changing travel plans. People are scrambling to get a smaller car, but there are few available. Houses are hotter in the summer for fear of electric bills. That diet everyone wants to be on is suddenly much easier. And it’s time to cut back on all the regrettable substance habits you picked up during lockdowns.

Every prediction is that inflation alone is enough to discredit the Biden administration, since the worsening seems to date almost perfectly to the day he took office. That would seem to indicate that a Biden-friendly Federal Reserve would make it a top priority to crush the price increases with some Volcker-style austerity starting now.

I’ve doubted this would happen to any great extent, and for three reasons. First, the money expansions of 2020–21 are already here and need to become endemic, to use language developed during COVID. Prices need to adjust one way or another. The Fed can mop up some excess but not easily and not completely.

Second, the Biden administration has a mixed view toward inflation itself. Early on, we got some hints when Biden and his spokespeople had the message of an upside: the rise in fuel prices will speed the necessary transition to wind and sun. This is a creepy view because it means that our standard of living will be sacrificed for a perverse Rousseauian vision of how we should live. And yet there should be nothing surprising here: This is precisely what Biden had been promising all along.

Third, and this is where it gets interesting, the center-left and far-left have a 90-year history of favoring inflation over depression. The former might be annoying but it’s the unemployment and negative growth that really gives them nightmares. Much of this traces to a bias built by John Maynard Keynes, the economist who rewrote economics to accommodate interwar trends in macroeconomic planning.

So I’d been awaiting the day when someone at The New York Times would issue the memo: Inflation is bad but depression is worse, so let’s always choose the former over the latter. This is precisely what happened. The headline reads: “A Recession Would Hurt Democrats. Some Warn It’d Also Hurt Democracy.”

The argument goes like this. Yes, inflation is going to hurt Democrats this November, but there will be time after the election for the Biden administration to deploy all kinds of emergency measures to contain it to some extent. However, if the Fed and the administration act right now with an all-out war on inflation, there will be a certain result: massive economic downturn, one that could last years.

And here is the conclusion that really chills these people: such a depression is nearly certain to sweep Donald Trump back into office in 2024. Here you can insert wailing and gnashing of teeth. This is always what The New York Times means by “hurt democracy.” You see, it is axiomatic in their minds that their power is democracy whereas Trump necessarily means some interwar-style dictatorial nightmare. They don’t say the word Hitler, but that’s what they mean.

The NY Times article cites the thoughts of one-time conservative David Frum. I was surprised to click it and find nothing but a Twitter thread. Here, Frum argues from recent history:

“The usual precondition of political survival is at least six months of strong growth before election day. Absent strong post-recession growth, and—like George HW Bush after recession of 1990–91—re-election gets dicey. … So if the US suffers an incumbent-wrecking recession in 2022–23, it may get a democracy-wrecking election the next year. The Federal Reserve has a more than usual obligation this week to measure its policy appropriately. A miscalculation in monetary policy in 2022 could reverberate through long ages of American history ahead.”

He adds a step back to the 19th century and the 1873 decision to restore the gold standard, which he says wrecked economic growth and ended Reconstruction in the South. He conveniently leaves out that this prepared the way for the two highest-growth decades in American history.

In any case, what matters here is the conclusion. The point is that it’s better to swallow the political losses from inflation than face the much-more-certain death from weak or falling economic growth. If forced to choose between these two poisons, the Democrats should always pick inflation. This choice is made all the more pressing by the grave threat of a second presidential term by Trump.

It’s probably normal for economics and politics to mix, but it’s a wild step beyond to turn a blind eye to the inflationary pillaging of the American working and middle class solely to feed Trump Derangement Syndrome, a malady that seems to have forever distorted clarity among this entire crowd. What this means is that there are people who are close to power who might have decided that your plight is just fine for now.

Yes, it’s chilling, but there’s another delusion at the heart of this kind of thinking. It seems to rule out the possibility that high inflation can coincide with a deep economic depression. The models they have long used seem to rule that out. And despite the brief appearance of stagflation in the 1970s, the general view out there is that you have to pick one over the other.

This is complete nonsense, and you see the evidence all around us today. When the Biden administration started releasing the petroleum reserve, did prices abate? No, and that’s because the devaluation of the dollar is already in play.

Yes, this defies all normal sense of things, and makes it appear as if the normal laws of supply and demand are no longer operational. That’s not really true at all. The real issue is that the supply and demand for money itself have flooded the same forces at work for goods and services. This has resulted in the highest inflation expectations in 41 years.

Keep in mind, too, that the velocity of money (the pace at which the stuff changes hands) has yet to really respond to these expectations, at least according to official data. Should that change and start heading north, inflation will get all kinds of new energy. Then, the Fed really will have a tiger by the tail.

The point is this. The Democrats believe they have to pick a poison: inflation or depression. The reality is pointing to a more terrible truth. They might have to drink both. Then they will face their worst-imagined fate regardless.