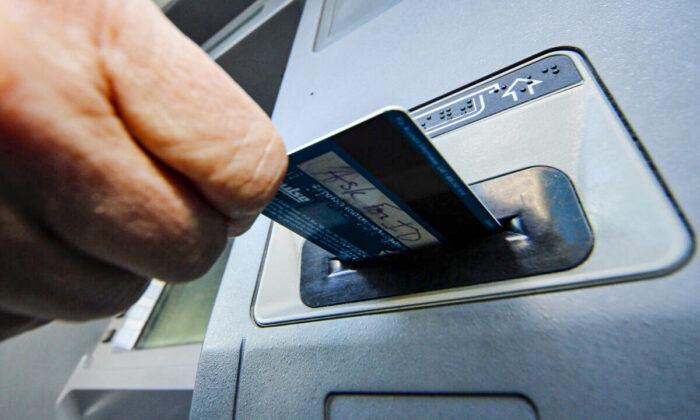 A person inserts a debit card into an ATM in Pittsburgh, PA. on Jan. 5, 2013. (Gene J. Puskar/AP Photo)
Personal Finance

Inflation Is Causing More Americans to Be Nervous About Their Savings

Rapidly rising high inflation rates are causing Americans to feel insecure about dipping into their emergency savings, according to a June 23 survey from Bankrate.com.

The rise in everyday living expenses due to inflation throughout the country has forced Americans to reassess their household budgets.

Inflation in May hit a 40-year historic high, forcing the Federal Reserve to boost interest rates in order to slow down the economy to control prices.

The consumer price index rose by 8.6 percent in May, according to the June 14 U.S Bureau of Labor Statistics report.

Some 63 percent of U.S. households have recently cut back on consumer spending, while 57 percent spent less on groceries, and 44 percent are reducing gas expenditures, according to a study from Breeze.

About 35 percent are making fewer debt payments, which can put people even further into debt.

About 58 percent of the 1,025 Americans surveyed are uncomfortable with the amount of money they have in their savings, up from 48 percent in July 2021 and up from 44 percent two years ago.

“The percentage of Americans who are comfortable with their emergency savings has gone from 54 percent to 42 percent in the past two years, while those [feeling] uncomfortable has jumped from 44 percent to a majority 58 percent,” says Greg McBride, CFA, Bankrate chief financial analyst.

“Inflation, at the highest levels in 40 years, will erode the comfort level with and buying power of your emergency savings.”

Out of those who responded that they were uncomfortable with their emergency fund, 75 percent said they had no savings or not enough to cover at least three months’ worth of living expenses.

Meanwhile, only 43 percent surveyed who were very uncomfortable have any personal savings on hand.

Some 23 percent of respondents admitted that they have no emergency savings at all, down from 25 percent in 2021, a sign that slightly more people may have more in their savings compared to before, likely due to remaining stimulus cash.

At least 27 percent of households still have enough emergency savings to cover six months or more of expenses, up from 25 percent since 2020, the highest it has been since 2018.

A total of 22 percent of households have enough saved to cover three to five months’ worth of expenses, the highest percentage in this category since 2011, while 28 percent had some savings, but not enough over the same time frame to cover expenses.

That figure is one of the lowest levels on record in 12 years since Bankrate started its poll.

“Despite having more savings, comfort level is way down,” said McBride, who continued, saying that “inflation being at four-decade highs will erode your comfort level in the buying power of your emergency savings.”

For households earning below $50,000, the number of those without any savings goes up to 37 percent.

“Even with fewer households having no emergency savings and 56% having the same or more savings than one year ago, the majority of Americans are uncomfortable with the emergency savings they have in 2022, a change from the previous two years,” said McBride.

Younger respondents are obviously having a more difficult time with savings, due to the fact that they have had less time to save.

Some 40 percent of millennials had admitted that they have enough saved to cover three months of expenses, while that number was at a respective 47 percent for Generation Xers and 62 percent for baby boomers.