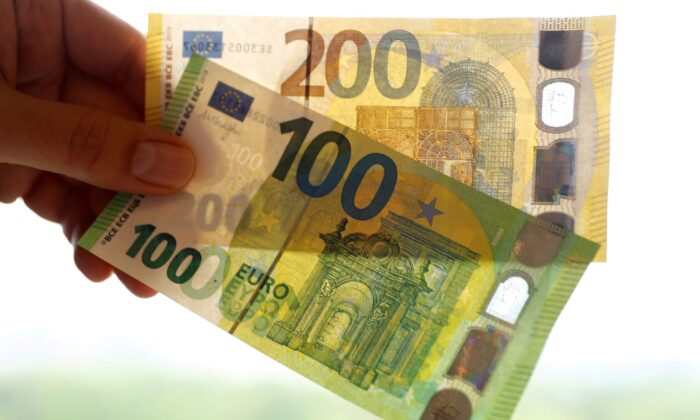 The new 100 and 200 euro banknotes are presented at the headquarters of the Bundesbank, Germany's central bank, in Frankfurt, Germany, on May 21, 2019. (Kai Pfaffenbach/Reuters)
Europe

Inflation in Germany hit a record high of 8.8 percent in August due to soaring energy prices, adding further pressure on the European Central Bank (ECB) to massively increase interest rates at its next meeting.

Germany, the European Union’s largest economy, hasn’t had inflation rates this high since the winter of 1973–74, when global prices were fueled by the 1973 oil crisis.

Food and energy prices have been the primary driver of inflation, due in large part to the war in Ukraine. Energy prices in Germany were up 35.6 percent in August compared to the same time in 2021, and food prices were up 16.6 percent.

Germany’s Federal Statistics Office said on Aug. 30 that the impact of price increases in those two categories has been partially offset by temporary government aid since June, including tax rebates on fuel and discounts on public transport.

However, both relief aid measures are set to expire on Aug, 31, which may lead prices to rise even higher.

Supply chain disruptions caused by the pandemic are also still being felt in the economy, the statistics office said.

Germany’s central bank, the Bundesbank, said in its August report that “the inflation rate could climb up to around 10% in the autumn,” though it noted that its inflation outlook is “extremely uncertain” because of uncertainty in commodity markets due to the war in Ukraine.

The Rest of Europe

The much-awaited Eurozone inflation report, which is to be released on Aug. 31, is expected to show inflation at 9 percent, up from 8.9 percent in July.

The ECB is expected to raise European interest rates by 50 basis points at its next meeting on Sept. 8, but a 75-basis-point hike may still be in the cards, especially if inflation hits yet another record.

The ECB has the dual challenge of controlling rising inflation in the bloc while avoiding further increases in the cost of living.

ECB Chief Economist Philip Lane cautioned against a larger step to control rising prices, as other policymakers on the central bank’s 25-member council are urging for a more aggressive policy to address inflation.

At a central banking panel discussion in Barcelona on Aug. 29, Lane said it’s important to have a steady pace that’s not too fast or too slow.

He believes that a 50-basis-point rate hike in September via a “multi-step calibrated series” of increases “rather than a smaller number of larger rate increases” would be less likely to cause the wider economy to face adverse effects from such a move.

ECB executive board member Isabel Schnabel said at the Jackson Hole, Wyoming, economic conference on Aug. 27 that there must be “strong determination to bring inflation back to target quickly,” and that a larger hike must be considered.

Inflation in the eurozone is about four times its 2 percent target rate, as Russian gas flows are being gradually choked off from the rest of the continent, increasing the likelihood of a serious recession.

“If the public expects central banks to lower their guard in the face of risks to economic growth, that is, if they abandon their fight against inflation prematurely, then we risk seeing a much sharper correction down the road,” she added.

There was some positive news on Aug. 30 after European energy benchmark prices fell, when the European Commission announced plans to manage the energy shortages.

Several countries in the bloc have been rapidly filling up their natural gas storage facilities before the winter season.