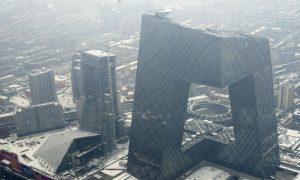 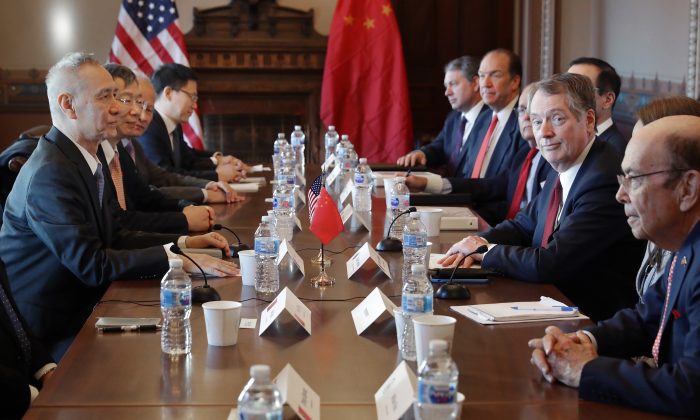 After Chinese state media published multiple commentaries that denounce the United States as bullying China in their trade talks and boast of China’s determination to “fight to the end,” there has emerged another type of propaganda war. Instead of targeting the United States as the enemy, the most recent round of media war is about infighting within the Chinese Communist Party (CCP) between two factions—”doves” and “hawks.”

The doves blame the hawks for advocating “extreme nationalism,” and the hawks attack the doves as being “capitulators.”

In a June 3 editorial, China’s financial magazine Caijing called on Chinese people to stay alert about extreme nationalism, especially voices that advocate closing the door to foreign countries, setting up a separate set of technical standards as well as economic and trade ecosystems.

“History has proven that setting up a separate, self-limiting, isolationist system will lead to nowhere. Promoting such ideas will only fit the wishes of some ill-intentioned people, and cause significant losses to the interests of the people,” the editorial read.

But the article was quickly removed from the Internet.

Three days later, the battle was taken up by an overseas Chinese publication.

“In this new era of information, we need to respect our readers’ time and learn to write clearly and concisely. I would advise the Chinese state media to stop the so-called ‘five commentaries and nine critiques.’ ‘Ministry of Truth,’ please give some serious thought to it. If the Chinese [regime] tries to claim authority both at home and abroad, it is doomed to fail, and such behavior will draw more criticism from the international community,” he wrote.

The whole scenario is very unusual because Ye is by no means a political dissident, yet he openly made a daring attack on China’s Central Propaganda, referring to it as the “Ministry of Truth” in an ironic tone.

This group of “doves” immediately became the target of Chinese state-run media.

Xinhua News Agency wrote a commentary on June 7, saying that a small fraction of people are advocating “capitulation to the United States.”

In Chinese culture, “capitulators” are always deemed most despicable, even if the invader is multiple times more powerful than the Chinese troops.

“They claim that China is at a disadvantage and we need to compromise with the United States,” the article said. “They even claim that the requests from the United States are ‘rational, legally fair and necessary.’ They one-sidedly blame China for the trade war, and accuse China of ‘returning kindness with ingratitude.’  All these are fawning behaviors … They are attempting to crumble Chinese people’s spirit of resistance.”

Xi’s Talk on Relations With US Ignored

Chinese leader Xi Jinping talked about U.S.-China trade frictions when he spoke at the Economic Forum in St. Petersburg, Russia, on June 7. But this was absent from China’s media reports.

According to Russia’s state-run media Sputnik, Xi said there are strong trade and investment connections between China and the United States. Although the two countries now have some trade frictions, “it’s hard to imagine that China and the United States can be completely separated from each other. I don’t want to see that happen, and I believe the American people who are friendly toward China, as well as my friend President Trump, don’t want to see that happen either.”

Chinese state media reported on the event, but put all the focus on the friendship and future cooperation between Russia and China, while completely leaving out Xi’s comment on “connections” and “friendship” with the United States.

According to current affairs commentator Shi Shi, these phenomena indicate that the CCP is now severely divided. He told the Chinese-language edition of The Epoch Times that within the party, and even within the top leadership, there must be a good number of pro-American party members.

“The current propaganda against the pro-American faction is an indication that the number of pro-Americans is not small, and their opponents have to spend some efforts dealing with this group of people.”