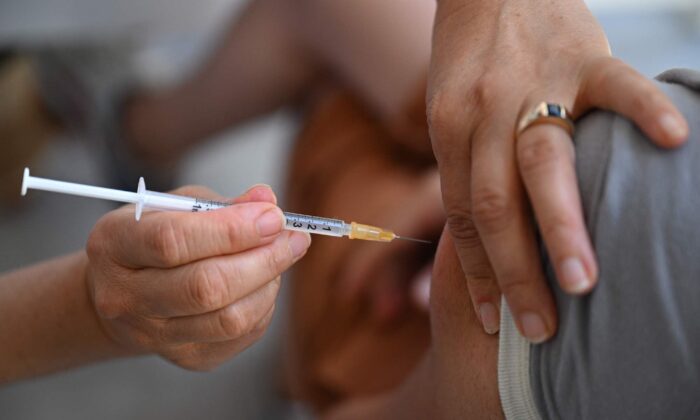 A health care worker administers a dose of Imvanex, a vaccine to protect against Monkeypox virus, at a municipal vaccination centre in Marseille, France, on Aug. 10, 2022. (Christophe Simon/AFP via Getty Images)
Regional News

Three women and an infant from King County, Washington, have reportedly tested positive for monkeypox infection. One of the three females who contracted the virus is said to have been exposed to it through sexual activity.

The infected infant is believed to have been exposed to the monkeypox virus (MPV) through an infected family member. The child was not infected from childcare, school, or another public setting, according to an Aug. 24 update published at the Public Health Insider, a portal maintained by members of the Communications Team at Public Health–Seattle & King County.

“The risk of MPV infection to the general public in King County including children is low. Cases among children nationally have been rare. However … children in a household with a person with confirmed MPV can become infected if there is close, prolonged and/or direct contact, such as what may occur during caregiving,” the update said.

In case a child is infected by MPV, the portal advises families to reduce the number of caregivers and limit the child’s interaction with its other siblings, including the sharing of bedding, clothing, linens, and toys.

As of Aug. 25, King County has reported 318 cases of monkeypox infections, up from 48 cases in mid-July. Most of the local cases have been found among men who reported intimate contact with other men. No individual has died from the virus in Washington.

According to the Seattle Times, State Secretary of Health Dr. Umair A. Shah asked citizens to look out for any new rashes on the skin and get them checked by a medical provider.

Washington has received 100 percent of its current allocation of MPV vaccines at 16,210 vials. Statewide, roughly 77,000 people are estimated to be at the highest risk of contracting monkeypox according to calculations by the State Department of Health.

The U.S. Biomedical Advanced Research and Development Authority put in a request for 5.5 million doses of the Jynneos MPV vaccine from Danish biotech firm Bavarian Nordic for 2022 and 2023. The company has signed up Michigan-based Grand River Aseptic to package its vaccine, with production estimated to begin later this year.

However, Bavarian Nordic vice president Rolf Sass Sorensen warned in a recent interview with Bloomberg that the company might not be able to keep up with the global vaccine demand as cases surge internationally.

“It’s a very dynamic market situation … Demand keeps rising, and it’s no longer certain that we can continue to meet the demand we’re facing even with the upgrade of our existing manufacturing site in Denmark,” he said.