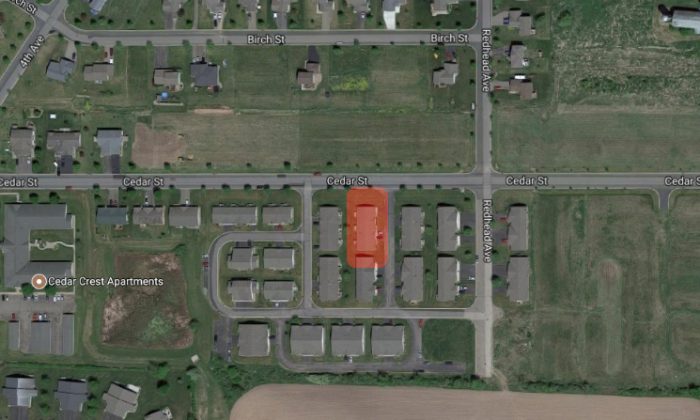 Highlighted is the house at 280 Cedar St. in Baldwin, Wis., where a father and his infant daughter were found dead. (Google Maps)
US News

Authorities in Wisconsin found the bodies of an infant girl and her father inside a Baldwin home, the Twin Cities Pioneer Press reported.

Authorities arrived at 280 Cedar St. Apt. 54 around 4:40 p.m. on Tuesday. Long died of a gunshot wound to the head, authorities said. First responders tried to resuscitate the infant but failed. The girl’s body did not show evidence of external or internal trauma, authorities told Fox 9.

The Ramsey County Medical Examiner had not determine the baby girl’s cause of death after a preliminary autopsy. The cause will be known after microscopic testing and a toxicology exam, Krueger said. Initial reports that the girl had a gunshot wound were inaccurate.

Krueger said police determined that Long committed suicide. He also said that the bereaved mother “has a great support team” surrounding her.

Investigators are looking into what Long was doing on Oct. 31. Officers are looking to determine how much time Long spent in the home.

Interviews with neighbors did not surface any helpful hints.

Dyllon Johnson, 18, witnessed the mother coming out of her home.

“She came outside yelling and talking on the phone saying they’ve been trying for the baby for years, and saying why would he do this to her,” Johnson told ABC5. “‘We tried so hard for this baby.’ And, you know, it’s just sad.”‘

“She was just really distraught,” Quinnell said. “She was really worried about her baby and she was kind of shocked.”

Neighbors were shocked to hear the news on an otherwise quiet street.

The mother broke her silence on Friday, saying that she believes that her husband is innocent.

“He didn’t hurt her,” Long told ABC5. “My husband never would hurt our child. He loved her, with every piece of his body.”

Long said that her husband went to sleep in the same bed as the baby. She believes the dad, who she describes as a gentle giant, rolled over on the baby as he slept or that the child was caught in the sheets or a pillow.

“They have this incredible bond, and he just didn’t want her to be alone. He needed to be with his baby,” Long said.

The grief-stricken mom said that her husband was a good man who loved his baby girl.

“And she was a great little girl, even for the short time that I got to be her mom,” Long said.