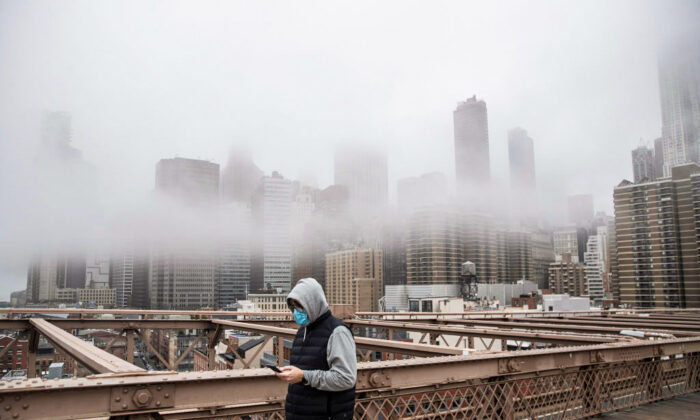 A man wearing a mask walks the Brooklyn Bridge in New York on March 20, 2020. Victor J. Blue/Getty Images
US News

Labor unions and related organizations took in $36.7 million in federal taxpayer funds through the Paycheck Protection Program for which they were legally ineligible, according to a new report from the Freedom Foundation.

Some loans were forgivable if specific criteria were met. SBA records show at least $24.2 million of the $36.7 million in labor union-related loans have been forgiven, according to the report (pdf).

Between the time the PPP was created in March 2020 and the American Rescue Plan was passed in March 2021, as many as 226 forgivable loans totaling $36.7 million were given to labor unions and related organizations that were barred under federal law from receiving the funds. Teachers’ unions, government employees’ unions, and advocacy organizations affiliated with the American Federation of Labor and Congress of Industrial Organizations (AFL-CIO) are among the most prominent beneficiaries of the relief funds.

“That hundreds of labor unions received tens of millions of dollars in federal COVID relief for which they were legally ineligible represents failure on so many levels,” said report author Maxford Nelsen, director of labor policy for the Olympia, Washington-based Freedom Foundation.

“It only adds insult to injury to know that teachers’ unions were getting federal funds all while trying to keep schools closed, and that labor groups that engage primarily in political advocacy received taxpayer dollars to do so,” Nelsen said.

The labor union borrowers weren’t eligible for PPP funds, which raises the possibility that some of the loans were fraudulently obtained, he said, adding that the Freedom Foundation has submitted its findings to the SBA’s Office of Inspector General and the Department of Justice’s National Center for Disaster Fraud for further investigation.

“Unions shouldn’t have applied—likely fraudulently—for aid for which they weren’t eligible,” Nelsen said.

“The lenders, themselves affiliated with unions in some cases, should have done their homework or not looked the other way when approving the union’ applications. And the Small Business Administration should have had better controls in place to ensure that only eligible organizations were being approved for loans.”

Several affiliates of the American Federation of State, County, and Municipal Employees (AFSCME) received PPP loans, but when asked about those loans, AFSCME spokesman Nick Voutsinos deflected questions about the wrongdoing those affiliates are accused of in the report.

Instead, Voutsinos sent a reply email that was empty except for a link to a post at a labor-funded website called Accountable Northwest that noted the Freedom Foundation had taken out a $650,000 PPP loan.

The Freedom Foundation says its mission is “limited, accountable government,” but it “apparently makes an exception for big federal handouts,” the post states.

Nelsen confirmed his employer took out a PPP loan but said it didn’t violate the law because it’s a recognized 501(c)(3) nonprofit. The loan, which was actually in the amount of $644,125, was later forgiven, along with accrued interest, which brought the total amount forgiven to $651,157.

Contacted by The Epoch Times, an MEA spokesman said the union applied for the loan believing that “doing so was the right decision given the guidelines available at the time and the tremendous uncertainty facing our organization.”

“However, as we prepared for the loan forgiveness application and reviewed final rules promulgated after the loans were funded, we believed we would be ineligible for forgiveness and, as such, paid back the PPP loan in full prior to the end of the 2020 calendar year,” Doug Pratt, MEA’s director of public affairs, said via email.

“Obviously, there was at least a false attestation that the union was qualified to participate in the program in the first place. And then the other concern is, while the MEA was in possession of this $6 million, that was money that was not then available to other eligible entities, small businesses that were trying to stay afloat,” Nelson said.

Even though labor unions weren’t eligible for loans under the Paycheck Protection Program, they still benefited from those loans, Nelsen said.

PPP loans allowed “employees, including unionized employees, to stay on the job and to continue getting paid” during the pandemic.

There was no need “to set up a separate set of funding for labor organizations” because “the unions were getting their cut of that money from any unionized employer that received PPP funds.”