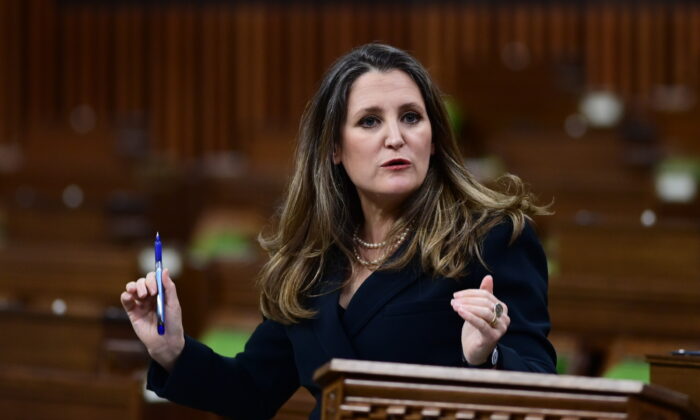 Finance Minister Chrystia Freeland responds to questions from MPs after she delivered the federal budget in the House of Commons in Ottawa on April 19, 2021. (The Canadian Press/Sean Kilpatrick)
Companies

Industry participants in the supply chain for products vital to Canada’s long-term economic success and security say Budget 2021 did not go far enough to ensure the country remains resilient and globally competitive.

COVID-19 has forced nations to re-examine their supply chains and manufacturing to ensure critical goods are available in sufficient quantities to meet their citizens’ rapidly changing needs. It has also advanced the pace of technological adoption.

In the April 19 budget, the feds noted that reciprocity in procurement partnerships is another approach it will be taking to fortify Canada’s supply chains.

“The government will pursue reciprocal procurement policies to ensure that goods and services are only procured from countries that grant Canadian businesses a similar level of market access. This will protect Canadian supply chains,” according to the budget.

A relevant example is the COVID-19 vaccine-development partnership between Canada and a Chinese firm that was abandoned last August due to Chinese customs not approving a shipment of vaccines to Canada for phase one clinical trials.

Conservative shadow minister for public services and procurement Pierre Paul-Hus said China proved to be an untrustworthy partner and that was a bitter setback for Prime Minister Justin Trudeau’s government.

“I find it a bit rich for Justin Trudeau to announce that his government will now pursue reciprocal procurement policies,” Paul-Hus said in an email to The Epoch Times.

Public Services and Procurement Canada did not respond to a request for more detail on reciprocal procurement, as mentioned in the budget.

Canadian Manufacturers & Exporters (CME) noted some of the positive steps the budget took to help its industry recover from the pandemic, but CEO Dennis Darby said there’s “not enough in there to move the needle and drive long-term growth.”

“Longstanding requests from CME to significantly drive technology investment and scale-up and commercialization through a comprehensive, targeted manufacturing strategy are largely missing,” according to a post-budget CME press release.

CME pointed out that the government’s own Industry Strategy Council recommended such a strategy. The council was created last May to assess COVID-19’s impact on the economy and to gather the business community’s input.

In its October 2020 report, the council recommended that Canada “follow the examples of our peer countries and apply a national security lens more broadly to drive domestic procurement in areas critical to the well-being of Canadians, such as transportation, energy, bio-technology, and life sciences.”

It added that if the government is the first buyer of made-in-Canada innovations in these spaces, that would enable firms to grow faster and enhance export potential.

The United States has been on a path of bolstering its supply chains given the threats and dominance from China.

U.S. President Joe Biden via executive order is fortifying supply chains in four critical industries, and the Republicans want him to work with allies on key technologies such as artificial intelligence, quantum computing, and 5G in the race against China.

In a May 2020 report, British think tank the Henry Jackson Society provided recommendations on how the Five Eyes intelligence-sharing network—consisting of Canada, Australia, New Zealand, the United Kingdom, and the United States—could break their dependence on China on imports that include 260 categories servicing critical national infrastructure like telecommunications.

The report specifically recommended that those countries work with their closest allies on goods and services associated with core areas of the future economy, the so-called Fourth Industrial Revolution, which include AI, computing hardware, and quantum technology.

The report also singled out goods like magnesium, the rare-earth elements, food supplementals, and pharmaceuticals.

The Mining Association of Canada (MAC) applauded the budget initiative to establish and grow a domestic battery electric vehicle supply chain, which will need more production and manufacturing of critical minerals.

“More must be done to specifically advance REE [rare earth element] development in Canada if we are to be an equal and credible partner with the United States in shoring up a domestic North American supply chain for these materials,” said MAC president and CEO Pierre Gratton in a press release.

He added that Canada can be a global leader in this space and be self-sufficient.

The feds announced a critical minerals list on March 11—31 minerals considered critical for the economic success of Canada and its allies. These are minerals that can be produced in Canada, are essential to domestic industry and security, and have the potential to support supply chains to meet global demand.

Australia is boosting local processing of critical minerals and resources to counter China’s control of supply chains. It wants to avoid simply exporting raw material to China and then buying the refined product at higher margins.

In a move to address shortages of drugs for treating COVID-19, Canada announced establishment of a Critical Drug Reserve on April 14. The government is procuring an initial three-month supply of 12 drugs.

The feds also aim to break down interprovincial trade barriers and reduce bureaucracy and red tape to strengthen supply chains.