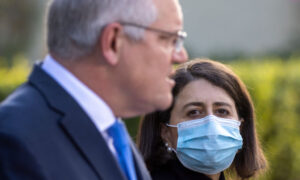 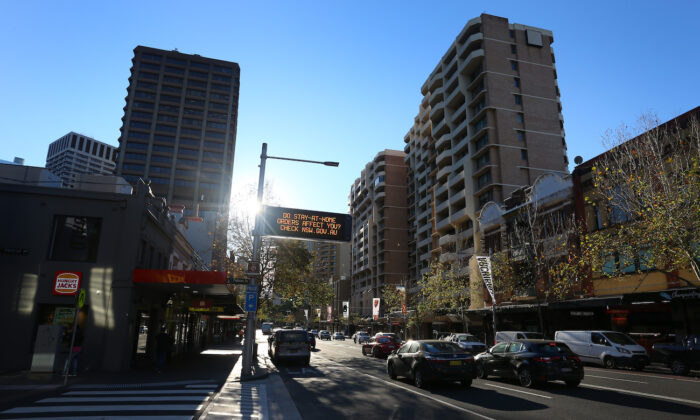 A government message is seen displayed on a digital sign on Oxford Street ahead of lockdown restrictions being imposed in Sydney, Australia, on Jun. 25, 2021. (Lisa Maree Williams/Getty Images)
Australia

Industry groups have warned against calls to reveal the names of all large employers who received JobKeeper payments despite recording profits.

Independent Senator Rex Patrick passed a motion, with the support of Labor, ordering the disclosure of all large companies who received the wage subsidy, how much they received, and how much they paid back, if applicable.

“Australians have a right to know which large employers have received taxpayer money and how much they received,” Patrick said, pointing to the New Zealand government which does publish the names of employers and has received more voluntary returns of their wage subsidy.

Prime Minister Scott Morrison and Treasurer Josh Frydenberg have previously said returning the JobKeeper payments in the event the company turned a profit was a matter for them to “do as they see fit.”

While many profit-recording companies have repaid the subsidy, others have also chosen not to.

Australian Industry Group (Ai Group) called the proposal to publish a “name and shame” list of businesses misguided and said the logic behind it was “astounding.”

“Ironically, it was because JobKeeper was such a success that these companies are now facing accusations that they are undeserving,” Ai Group CEO Innes Willox said on Sunday.

“To be absolutely clear, the proposed criteria for naming and shaming do not in any way amount to evidence that the relevant businesses behaved fraudulently or that they misrepresented their circumstances in order to receive JobKeeper,” he said.

Willox said the fact that JobKeeper—which was passed with bipartisan support—was not designed to be repaid was a critical reason why the stimulus was effective.

Echoing the Ai Group, the Australian Chamber of Commerce and Industry (ACCI) said the demands were “short-sighted” and that the scheme was not a loan.

“Efforts to publish the names of certain businesses that were recipients of the JobKeeper scheme are a deliberate attempt to smear thousands of employers,” ACCI CEO Andrew McKellar said.

McKellar said businesses took the payments in accordance with the rules and those advocating to reveal the full list of JobKeeper recipients were forgetting the context in which the scheme had been implemented.

The Tax Commissioner Chris Jordan and the treasurer have been pushing back on Patrick’s motion, saying it could create a dangerous precedent of revealing private information without their consent.

In separate letters to the Senate President, Jordan claimed public interest immunity from the order while Frydenberg supported the claims.

“Upholding these [tax secrecy] laws is therefore vital to the continued confidence of Australians in government and the assurances it provides about the protection of their confidential information,” Frydenberg wrote on Aug. 26.

Both the Ai Group and ACCI have agreed with Jordan’s warning, saying the privacy concerns must not be dismissed.

“Business will be apprehensive to provide sensitive information to the ATO if confidentiality is breached,” McKellar said. “Calls by some Senators to release the names of businesses that utilised the scheme are misguided; we urge the Senate not to go down this path.”