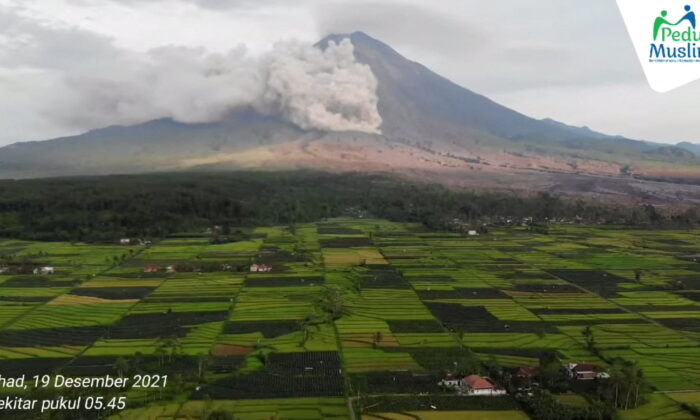 A drone view shows smoke and ash rising from side of Semeru volcano, in Lumajang, East Java, Indonesia, December 19, 2021, in this still frame obtained from social media video. Courtesy of Peduli Muslim/via REUTERS THIS IMAGE HAS BEEN SUPPLIED BY A THIRD PARTY. MANDATORY CREDIT. NO RESALES. NO ARCHIVES. MUST NOT OBSCURE LOGO
World

Earlier this month, the eruption of Semeru, Java’s tallest mountain, ejected ash clouds and pyroclastic flows that killed at least 46 people and left several missing, while thousands were displaced.

On Sunday, the early morning eruption resulted in dense white and grey ash clouds, according to Indonesia’s Center for Volcanology and Geological Hazard Mitigation (PVMBG).

The agency warned nearby residents not to conduct any activities within a five kilometers (three miles) radius of the eruption centre and to keep a 500 meter (1,500 feet) distance from riversides due to risks of lava flow.

PVMBG also told people to not conduct any activities within 13 km (eight miles) southeast of the eruption centre.

With 142 volcanoes, Indonesia has the largest population globally living in close range to a volcano, including 8.6 million within 10km (six miles).