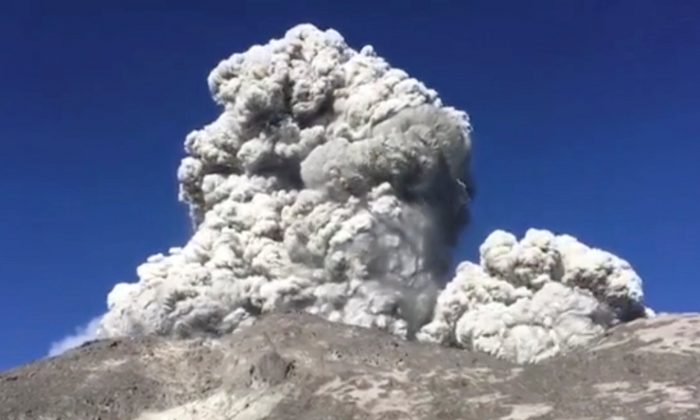 A volcano is seen erupting in Central Java, Indonesia, in this May 11, 2018 still image taken from a video obtained from social media. (Shopan Pangestu/via Reuters)
Asia & Pacific

Indonesia’s Most Active Volcano Rumbles, Public Ordered to Stay Away

JAKARTA—Indonesia’s most active volcano, Mount Merapi on densely populated Java island, has shown danger signs with a series of small eruptions, and authorities have ordered villagers living on its slopes to leave and hikers to stay clear.

A series of eruptions at Mount Merapi in 2010 killed more than 350 people and authorities are taking no chances after plumes of smoke and ash billowed into the sky late on Monday.

“There can be no public activity within a 3 km radius. Hiking is also temporarily prohibited,” a spokesman for the national disaster mitigation agency, Sutopo Purwo Nugroho, said in a text message.

The agency raised the alert level a notch on Tuesday.

Through the ages, Indonesians have tilled the fertile volcanic soil on the mountain’s slopes and more recently the volcano has become a tourist site.

The disaster agency described Merapi’s eruptions as phreatic, which means magma heats up ground water and vapour is released under pressure.

This month, the airport in Yogyakarta, the closest city to the volcano, was briefly shut down because of the eruptions.

Only two seconds passed between the girl going under and Pol pulling her to safety.