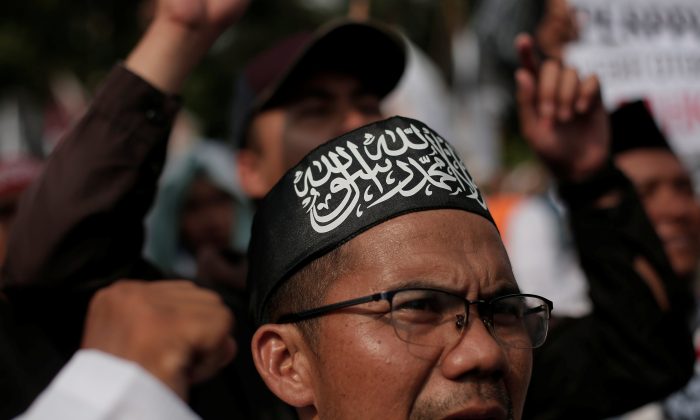 A man has his head covered with a Hizbut Tahrir Indonesia flag during a protest against the President Joko Widodo's decree to disband Islamist groups in Jakarta, Indonesia, July 28, 2017. (REUTERS/Beawiharta)
Asia & Pacific

Indonesia’s Bid to Root out Islamists Throws Spotlight on Universities

NUSA DUA, Indonesia—When students at Indonesia’s prestigious Institute of Agricultural Studies swore an oath to support a caliphate in the world’s largest Muslim-majority country last year, a video of the event went viral and the government grew alarmed.

Months later, Indonesian President Joko Widodo banned the decades-old hardline group Hizb ut-Tahrir Indonesia (HTI), which organized the student pledge, and declared its goal to set up a caliphate was incompatible with the Indonesian constitution and could threaten security.

Last month, under prodding from the government, thousands of students across the nation made an anti-radicalism pledge. It followed an unprecedented gathering in late September of some 3,000 academics in Bali, who also pledged to fight extremism and defend the secular constitution.

The campaign against extremism in education comes amid a rise of a hardline, politicized Islam in Indonesia, which until recently had occupied the fringe of the nation’s politics.

“Radical organizations can spread like a virus in universities,” said Professor Muhammad Sirozi, rector of the State Islamic University Raden Fatah in Palembang on Sumatra.

“These are not the organizations that students form themselves, but they are from outside,” he said at a briefing that outlined ways to help universities tackle radicalism following the Bali conference.

The campaign to root out boosters of the caliphate is not just confined to schools.

A document collated by Indonesia’s intelligence agency lists 1,300 HTI members in senior posts in the civil service, universities, the military and police.

An intelligence source confirmed the authenticity of the document, which was reviewed by Reuters. Some of those on it declined to comment after being contacted, but HTI’s former spokesman Ismail Yusanto said it did include some of its members.

Illustrating how a politicized brand of Islam has gained traction, nearly 20 percent of high school and university students in Indonesia support the establishment of a caliphate, a survey showed last week.

Moreover, around one in four of the 4,200 Muslim students in the survey by pollster Alvara said they were, to varying degrees, ready to wage jihad to achieve this.

Hizb ut-Tahrir, an international organization, established by a Palestinian Islamic scholar in 1953, has been banned in some Arab, Asian and European countries. One of its former members in Indonesia is Bahrun Naim, who went to fight for ISIS in Syria and is accused of masterminding a series of attacks in Indonesia since early last year.

An officially registered organization in Indonesia since 2000, HTI has sought a judicial review in the constitutional court over its disbanding.

“They never gave us a chance to defend ourselves. Is it not an authoritarian and repressive action?” said HTI spokesman Yusanto, who likened the crackdown to the tactics used against opponents under former strongman President Suharto.

Asked whether HTI was still operating, Yusanto said no one could ban members from their duty to do “Dakwah” (missionary work) and those activities would continue.

Higher Education Minister Muhammad Nasir told reporters in July that HTI members were lecturers “in many universities” – Indonesia has 394 state universities and about 3,000 private ones. He warned they could be sacked unless they proffer loyalty to Indonesia’s ideology of Pancasila, or “five principles,” that was first spoken about by Indonesian nationalist leader Sukarno in 1945.

Yusanto said, however, no lecturers who were HTI members had been sacked. A Home Ministry spokesman said a task force set up to find members in the civil service had not found any so far.

One former HTI member, Ayik Heriansyah, said the group tries to enlist support from influential members of society and sympathizers in the security forces to overthrow governments, or what it terms “the handing over of power”.

Universities have been a key recruiting ground.

Heriansyah, who was once chairman of HTI at the University of Indonesia, said potential recruits were usually invited to an Islamic study group. After about three months, they might be asked to participate in intensive Hiz b-ut-Tahrir study, said Heriansyah, who said left the group after a falling out with its central board.

Heriansyah said the ban on the group would simply push it underground.

“They are still running the movement as usual, but with a new structure and stewardship,” he said.

HTI has not disclosed its membership. Raymond Arifianto, a research fellow at Singapore’s S. Rajaratnam School of International Studies, said his sources say HTI had about one million members, including an estimated 10-15 percent of junior army officers as members or sympathizers.

A spokesman for Indonesia’s military denied this.

A survey published last December by the Institute for the Study of Islam and Society, showed that 78 percent of 505 religious teachers in public schools supported implementing sharia law in Indonesia. The survey also found that 77 percent backed Islamist groups advocating this goal.

Clerics offered their services for free, often with school principals and teachers being unaware of their affiliation, he told Reuters. HTI’s spokesman denied this was a strategy but said members were obliged to do missionary work without charge.

Indonesia’s biggest Islamic groups, the moderate Nahdlatul Ulama (NU) and Muhammadiyah, which claim to have about 120 million members between them, back the crackdown on HTI.

Yaqut Cholil Qoumas, chairman of NU’s GP Ansor youth wing, said that Indonesia had been built by many religions and cultures, but “HTI came and wanted to change this diversity into one nation called an Islamic country.”