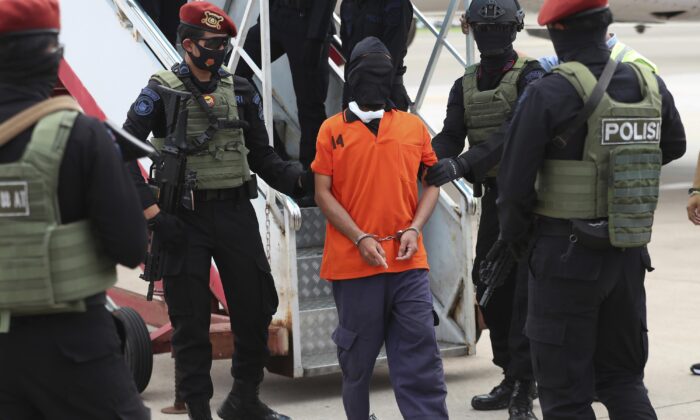 JAKARTA, INDONESIA—An Indonesian court sentenced an Islamic terrorist who eluded capture for 16 years to life in prison on Wednesday after finding him guilty of making bombs used in a 2005 market attack that killed 22 people.

Upik Lawanga, known as “professor,” is a key member of the Jemaah Islamiyah network, which the United States has designated a terrorist group. It is widely blamed for attacks including the 2002 bombings on the Indonesian resort island of Bali that killed 202 people, mostly foreign tourists, as well as attacks in the Philippines.

The East Jakarta District Court found Lawanga, 43, guilty of involvement in the May 28, 2005, attack at Tentena market in Poso district which killed 22 people and injured 91 others, mostly Christians. Muslim-Christian conflicts in Poso in Central Sulawesi province killed at least 1,000 people from 1998 to 2002.

Lawanga was also accused of building bombs used in a 2004 passenger minibus attack that killed six people and a 2006 attack using a flashlight bomb that killed a Christian woman.

“What the defendant has done was a crime against humanity that left deep wounds, trauma and sorrow for the families of the victims,” said Presiding Judge Sutikna, who goes by a single name.

Lawanga said he would appeal the decision. He argued in court that he helped make the bombs but did not carry out the attacks, saying he did not know how they would be used. He said he was only obeying orders from other senior members of the group to assemble bombs to avenge Christians for the massacre of Muslims at an Islamic boarding school during sectarian conflict in May 2000.

He said his motive was the deaths of relatives and friends in the Muslim-Christian conflict and the burning of mosques and his brother’s house.

Other militants testified that Lawanga was nicknamed the “professor” because of his ability to build bombs and firearms. They described him as an important figure because of his expertise.

Lawanga said he joined Jemaah Islamiyah in Poso in 2002 and learned how to assemble bombs from Azahari bin Husin, a Malaysian bomb-making mastermind who was killed in a police raid in Indonesia in 2005.

Lawanga left Poso after the 2005 attacks and lived with his wife and children in Lampung as a duck farmer.

The trial began early September and was held remotely due to the coronavirus pandemic.

Lawanga, whose real name is Taufiq Bulaga, became one of the country’s most wanted terrorists after being named as a suspect in the Tentena market attack. He was arrested last year in the same southern town on Sumatra island where Zulkarnaen, believed to be the military leader of the Jemaah Islamiyah network, was arrested by counterterrorism police a week later. Zulkarnaen had been on the police wanted list for 18 years.

Police, who learned of their hideout after interrogating several militants arrested earlier, found a bunker at Lawanga’s house with handmade guns and explosive materials.

The two were tried separately at the same court.

An Indonesian court banned Jemaah Islamiyah in 2008, and a sustained crackdown by security forces with support from the United States and Australia helped weaken the terrorist network.

Indonesia’s police counterterrorism unit, known as Densus 88, has arrested more than 500 suspected Jemaah Islamiyah members in the past two years, including a member of the Indonesia Ulema Council, the country’s highest Islamic body, who was arrested last month.

Authorities estimate the group has more than 6,000 members.