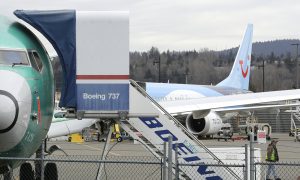 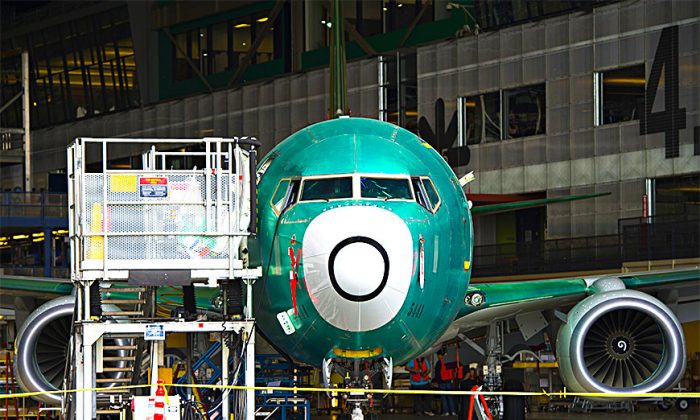 A Boeing 737 aircraft during the manufacturing process at the Boeing factory in Renton, Wash., on May 19, 2015. The company is America’s biggest manufacturing exporter. (Saul Loeb/AFP/Getty Images)
Companies

JAKARTA/OSLO—Indonesian airline Garuda plans to cancel a $6 billion order for Boeing 737 MAX jets, it said on Friday, saying some passengers would be frightened to board the plane after two fatal crashes, although analysts said the deal had long been in doubt.

The news came as another 737 MAX customer, Norwegian Air, played down the significance of a move by Boeing to make a previously optional cockpit warning light compulsory.

Norwegian said that, according to Boeing, the warning light would not have been able to prevent erroneous signals that Lion Air pilots received before their new 737 MAX plane crashed off Indonesia in October, killing 189 people.

“Many passengers told us they were afraid to get on a MAX 8,” Garuda CEO Ari Askhara told Reuters on Friday.

However, the airline had been reconsidering its order for 49 of the narrowbody jets prior to the Ethiopian crash, including potentially swapping some for widebody Boeing models.

Southeast Asia faces a glut of narrowbody aircraft like the 737 MAX and rival Airbus A320neo at a time of slowing global economic growth and high fuel costs.

“They have been re-looking at their fleet plan anyway so this is an opportunity to make some changes that otherwise may be difficult to do,” CAPA Center for Aviation Chief Analyst Brendan Sobie said.

Indonesia’s Lion Air has also said it might cancel 737 MAX aircraft, though industry sources say it is also struggling to absorb the number of planes on order.

Both crashes are still being investigated. But regulators have noted some similarities between the two, and attention has focused on whether pilots had the correct information about the “angle of attack” at which the wing slices through the air.

No direct link has been proven between the accidents.

Boeing now plans to make compulsory a light to alert pilots when sensor readings of the angle of attack do not match – meaning at least one must be wrong -, according to two officials briefed on the matter.

The Lion Airplane did not have the warning light installed because it was not compulsory. Ethiopian Airlines did not immediately comment on whether its crashed plane had the alert.

But the Ethiopian carrier, whose reputation along with Boeing’s is at stake, issued a statement on Friday emphasizing the modernity of its safety and training systems, with more than $500 million invested in infrastructure in the past five years.

The Ethiopian crash has set off one of the widest inquiries in aviation history and cast a shadow over the Boeing 737 MAX model intended to be a standard for decades.

Boeing did not comment on the plan to make the safety feature standard, but separately said it was moving quickly to make software changes and expected the upgrade to be approved by the U.S. Federal Aviation Administration (FAA) in coming weeks.

Experts said it could take weeks or months to be done, and for regulators to review and approve the changes. Regulators in Europe and Canada have said they will conduct their own reviews of any new systems.

Norwegian said its 18 737 MAX jets did not have the cockpit warning light, but it would follow any recommendations made by Boeing and aviation regulations. The airline said last week it would seek compensation from Boeing for the cost of grounding its 737 MAX planes, which makes up 11 percent of its fleet.

Since the Ethiopian crash, Boeing shares have fallen 12 percent and $28 billion has been wiped off its market value.

Pressure has mounted on the company from U.S. legislators, who are also expected to question the FAA. The company faces a criminal investigation by the U.S. Justice Department as well.

Several lawsuits have already been filed on behalf of victims of the Lion Air crash referring to the Ethiopian accident. Boeing declined to comment on the lawsuits.

By Cindy Silviana and Terje Solsvik