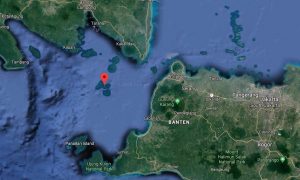 As rescue efforts turn to recovery in the wake of the tsunami that killed at least 222 and injured over 800 in Indonesia, questions mount as to the efficacy of the early warning system.

An underwater landslide caused by volcanic activity triggered the tsunami, which slammed into the Indonesian islands of Java and Sumatra on Dec. 22, leaving havoc and devastation in its path.

The wall of water crashed into hotels, houses, and a group of people attending a beach concert.

“Underwater I could only pray,” Zack, a crew member of  the band, said on Instagram. “In the final seconds I almost ran out of breath,” he said, adding that he held onto a collapsed part of the stage to survive the ordeal, reported Channel News Asia.

Hundreds of homes and other buildings were “heavily damaged” when the tsunami struck, almost without warning, along the rim of the Sunda Strait said Sutopo Purwo Nugroho, spokesman for the disaster mitigation agency.

Thousands of residents were forced to evacuate to higher ground. By 5:40 p.m. local time, Sunday, Dec. 23, the disaster agency had raised the death toll to 222, with 843 injured and 28 missing.

Nugroho said that 556 houses, nine hotels, 60 culinary stalls, and 350 boats were known to have been damaged.

President Joko Widodo, who is running for re-election in April, said on Twitter that he had “ordered all relevant government agencies to immediately take emergency response steps, find victims, and care for the injured.”

Coastal residents reported not seeing or feeling any warning signs on Saturday night, such as receding water or an earthquake, before waves of 2-3 meters (6-10 feet) washed ashore, according to media.

Authorities said a warning siren went off in some areas.

Professor Dougal Jerram from the University of Oslo explained that tsunamis caused by volcanic activity might not trigger a warning and can strike unexpectedly.

“Tsunamis can be caused by volcanically induced landslides above or below water, and by volcanic eruptions themselves,” Jerram told The Guardian.

“Unlike tsunamis caused by earthquakes, such volcanically induced tsunamis may not trigger warning systems that are designed to alarm after large quakes, and thus may provide little warning.”

Dr. Simon Boxall from the National Oceanography Centre and University of Southampton said, “There will be an outcry as to why an early warning system didn’t kick in.”

Boxall added, “The same criticism was leveled after the September Palu tsunami, which killed 2,000 people.”

He further explained, “These tsunamis are very localized and to cover the Indian Ocean with sufficient sensors to warn against all such eventualities would require many thousand buoys on the network.”

But Professor David Rothery, who teaches Planetary Geosciences at the Open University, told The Guardian that even if warning buoys had been placed right next to the volcano that triggered the landslide, it might not have done much good.

“Tsunami warning buoys are positioned to warn of tsunamis originated by earthquakes at underwater tectonic plate boundaries,” Rothery said. “Even if there had been such right next to Anak Krakatau, this is so close to the affected shorelines that warning time would have been minimal given the high speeds at which tsunami waves travel.”

It has been a torrid year for the vast archipelago that sits on the Pacific Ring of Fire. Successive earthquakes flattened parts of the tourist island of Lombok in July and August, and a double quake-and-tsunami killed more than 2,000 people on Sulawesi island in September.

And while Indonesia was the worst country affected by the devastating Boxing Day 2004 tsunami that killed hundreds of thousands of people, it still lacks the proper equipment to provide warning of an impending tsunami threat.

“We need multi-hazard early warning system,” Nugroho said, according to CNN. “And we need lots of it.”

As night fell on Sunday, rescue efforts continued but workers and ambulances were finding it difficult to reach affected areas because some roads were blocked by debris from damaged houses, overturned cars, and fallen trees.

Authorities warned residents and tourists in coastal areas around the Sunda Strait to stay away from beaches and a high-tide warning remained in place through Dec. 25 as officials tried to determine the exact cause of the disaster.

“Those who have evacuated, please do not return yet,” said Rahmat Triyono, an official at the Meteorology, Climatology and Geophysics Agency (BMKG).

What Caused the Tsunami?

The tsunami was caused by “an undersea landslide resulting from volcanic activity on Anak Krakatau” and was exacerbated by an abnormally high tide because of the full moon, Nugroho said.

Anak Krakatau, an active volcano roughly halfway between Java and Sumatra, has been spewing ash and lava for months. It erupted again just after 9 p.m. on Saturday and the tsunami struck at around 9.30 p.m., according to BMKG.

Ben van der Pluijm, an earthquake geologist and a professor in the University of Michigan, said the tsunami may have been caused by a “partial collapse” of Anak Krakatau.

“Instability of the slope of an active volcano can create a rock slide that moves a large volume of water, creating local tsunami waves that can be very powerful. This is like suddenly dropping a bag of sand in a tub filled with water,” he said.

The eruption of Krakatau, previously known as Krakatoa, in 1883 killed more than 36,000 people in a series of tsunamis.