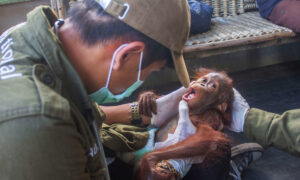 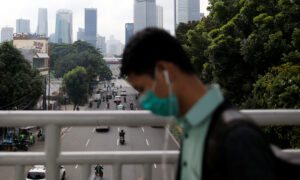 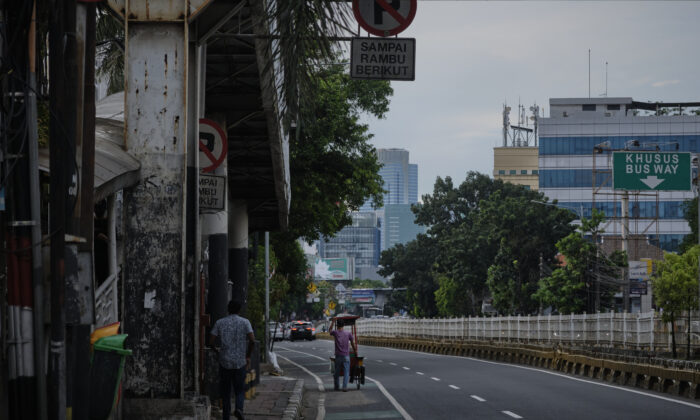 A stretches vendor pushes his cart along a road which would ordinarily be bumper to bumper traffic in Jakarta, Indonesia, on April 8, 2020. (Ed Wray/Getty Images)
Asia & Pacific

JAKARTA—Indonesia reported its biggest daily jump in COVID-19 deaths on Thursday, bringing the total confirmed number to 280 in the world’s fourth most populous country, the highest death toll in Asia outside China where the CCP virus, also known as the novel coronavirus, first emerged.

Indonesia confirmed 40 more deaths and its death toll accounts for nearly half of the more than 590 across Southeast Asia. More than 16,500 cases have been reported across the region.

Indonesia has brought in “large-scale social restrictions,” but President Joko Widodo has resisted bringing in the type of tough lockdowns imposed by neighbours. Only Jakarta, where there has been a spike in cases, was given more draconian powers to clampdown on the movement of citizens.

Researchers at the University of Indonesia have predicted there could be 140,000 deaths and 1.5 million cases by May without tougher curbs on movement and gathering.

Indonesia has stepped up the number of tests to 16,511 as of Wednesday, but for a country with more than 260 million people, it has had one the lowest testing rates in the world

Neighbouring Malaysia, with only 32 million people, has conducted 69,675 tests.

There are also growing fears that the outbreak could spread across the archipelago during the annual exodus to home villages for the Muslim Ramadan holiday. Widodo has said the government would give aid to poorer families, particularly in Jakarta, to persuade them to stay put but has rejected calls for an outright ban on the “mudik,” as the holiday is known.

Malaysia reported 109 new infections on Thursday, the second-lowest daily increase since a partial lockdown was imposed on March 18.

The data comes a day ahead of possible ministerial discussions on whether to extend the curbs on travel and non-essential businesses beyond April 14.

The country has so far recorded 4,228 infections—the highest in Southeast Asia—with 67 deaths. But government officials have said the restrictions are showing results.

“We have done well,” Ministry of Health Director General Noor Hisham Abdullah told a news conference. “We have a small window of opportunity. If we do it right we may be able to avert the surge that we have seen in other countries.”