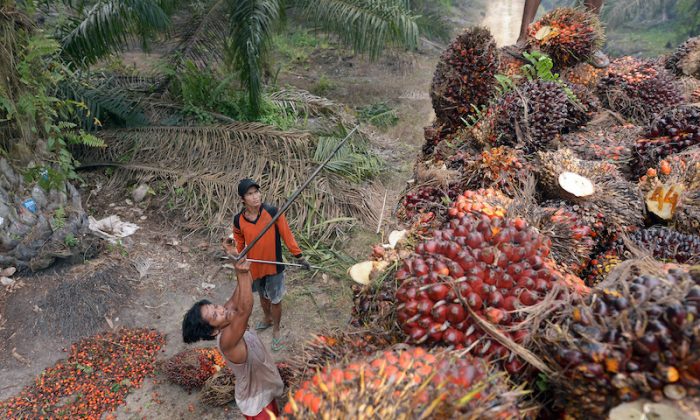 This picture taken on Sept. 16, 2015 shows workers loading palm oil seeds into the back of a truck at a plantation area in Pelalawan, Riau province in Indonesia's Sumatra island. (Photo credit should read ADEK BERRY/AFP/Getty Images)
Asia & Pacific

While the proposal has been welcomed by the palm oil industry and government, it has raised concerns among the automobile industry the fuel could impact engine performance.

The following explains some of the issues surrounding the drive to increase biodiesel usage.

Indonesia currently imports around 400,000 barrels per day of crude oil and a roughly similar amount of refined products, which makes Southeast Asia’s largest economy vulnerable to the sort of increases in global crude prices seen over the past year.

With the current account deficit estimated to grow by $8 billion in 2018, the plan is to cut diesel imports by mandating that all diesel consumers, including power plants and railways, use biodiesel that contains 20 percent bio-content (B20), typically palm oil. Officials estimate this will save Indonesia around $6 billion per year.

The program will increase domestic consumption of palm oil in the world’s largest producer of the edible oil, providing a market for output that has climbed by 35 percent over the past five years.

In Indonesia, the biocomponent in biodiesel consists of fatty acid methyl esters (FAME) made from palm oil.

Indonesia has 26 FAME producers, including units of palm oil giants like Sinar Mas Group, Wilmar, and Musim Mas, according to the Indonesian Biofuels Producers Association (APROBI).

FAME is supplied to fuel distributors including Pertamina, blended with petroleum-based diesel and sold to end-users.

Currently, only around one-quarter of Indonesia’s FAME production capacity is utilized, and the new program could raise this to up to 50 percent, said Togar Sitanggang, a senior official at the Indonesia Palm Oil Association (GAPKI).

The government has said it will provide incentives to biodiesel producers but has not provided details.

Efforts to increase FAME concentrations in biodiesel have faced resistance from regulators and the automotive and oil industries in the past.

Indonesia is supporting a program to make 100-percent palm oil-based biodiesel without FAME.

Rules introduced in 2015 make B20 mandatory in subsidized biodiesel up to January 2020, after which B30 is scheduled to become mandatory.

While B20 use is generally accepted for new vehicles, higher FAME blends may pose problems. FAME has a solvent effect that can corrode engine seals and gaskets, potentially increasing maintenance costs, and requiring special handling and equipment.

According to the AFDC, the more FAME there is above 20 percent in biodiesel, the lower its energy content. FAME use could also increase nitrogen oxide emissions, although it greatly reduces other toxic emissions, it said.

In a 2016 assessment, the Japan Automobile Manufacturers Association (JAMA) concluded that biodiesel with no more than 20 percent FAME content was acceptable for vehicles that comply with the Euro IV emissions standard, among other conditions.

In a 2015 study by Indonesia’s Technology Assessment and Application Agency (BPPT), six passenger vehicles from three manufacturers were driven over 25,000 miles using B20 biodiesel and regular diesel.

The test found that B20 improved vehicle performance and acceleration, and reduced emissions, but the vehicles consumed roughly 4 percent more fuel than vehicles using regular diesel.

Tatang Soerawidjaja, chairman of the Indonesian Association of Bioenergy Scientists and Technologists, said extensive tests have shown that B20 poses “no problems” for diesel engines, even in older models.

Filters would only need replacement or more frequent cleaning in the early phase of adopting biodiesel use, he said, referring to FAME’s solvent effect when mixed with regular diesel.

“The bio content cleans dirt off of the tank’s walls and pipes, and this ends up in the filter,” he said.