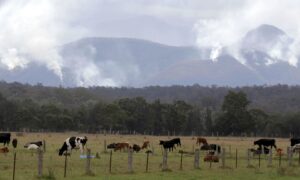 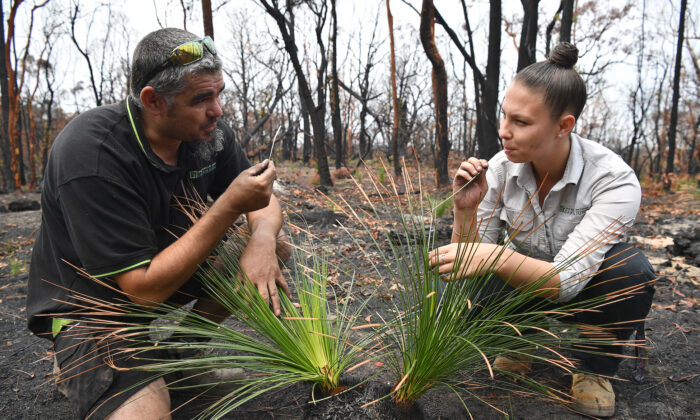 Kelvin Johnson (right) and Amanda Shields from the Darkinjung Local Aboriginal Land Council chew on the root of an Xanthorrhoea Australis or Black Boy plant among bushland destroyed by bushfires in Kulnura, Wednesday, January 15, 2020. The area hit by the Wrights Creek Fire in early December 2018. (AAP Image/Joel Carrett)
Australia

An Indigenous burn practitioner on Jan. 15 urged Australia’s state fire policymakers to “cut the stringent red tape” and “get the bush between their toes” as his people begin to assess the damage caused to their country following the devastating bushfire season.

On Wednesday, Kelvin Johnson, the senior land management officer with the Darkinjung Local Aboriginal Land Council, was allowed to return to the bush in Kulnura, west of Wyong on the New South Wales Central Coast, for the first time to inspect damage after the Three Mile Fire burned through the region in December.

The practitioner, who joined the NSW Rural Fire Brigade in 1997 but left in 2003 and became a cultural burn practitioner, said that while there was widespread devastation, the area had fared better than others.

Johnson subscribes to the belief that the land can be managed using indigenous burning and mitigation techniques.

According to the Australian Walkabout Wildlife Park, cultural burning is “a traditional practice developed by Aboriginal people to enhance the health of the land and its people and includes burning (or prevention of burning) for the health of particular plants and animals.”

He said that although he understands the need for environmental and hazard reduction burns regulation, the current red tape is too stringent and urged policymakers to become better attuned to the country.

“They’ll stop you burning because of an orchard or a tree or a plant on a property,” he said.

“But then they do nothing about it—you can’t mitigate the risk. When a wildfire comes through, it doesn’t discriminate—it takes everything out.

“The environmental assessment process that all people have to abide by, those safeguards need to be there, but they need to understand there needs to be another way,”

The practitioner urged policymakers not to “just look at a book that you studied at university” but to “get out into the bush, feel the bush, they need to get the bush between their toes, smell the smells, listen to the sounds. Connect to that bush.”

“That will give you a better understanding of what that bush needs. Not a piece of paper, not a university degree,” he added.

Assessing the damage to the bush in Kulnura, Johnson said “70 percent of the biodiversity of the flora” has been lost. He estimates it will take 18 to 24 months for the land to recover.

Already trees are beginning the process of renewal while others have been completely decimated and some that were 400 years old had been hollowed out.

But the practitioner said that the disaster “needed to happen to cleanse the bush because it was so sick out there” and that “people in certain circles saw coming.”

“Everything was already sick. You couldn’t walk 10 meters in some spots, (the fuel load) was that thick,” he said.

On Jan. 9, the Australian Bureau of Meteorology announced that the very strong positive Indian Ocean Dipole (IOD), which has been a big driver behind the country’s hot, dry conditions since September, has now eased into a neutral phase, with monsoon rains now reaching northern Australia.

A shift in another climatic driver from the south has also meant that more moisture is expected to reach further down the east coast from the tropics.

With reporting from The Australian Associated Press.