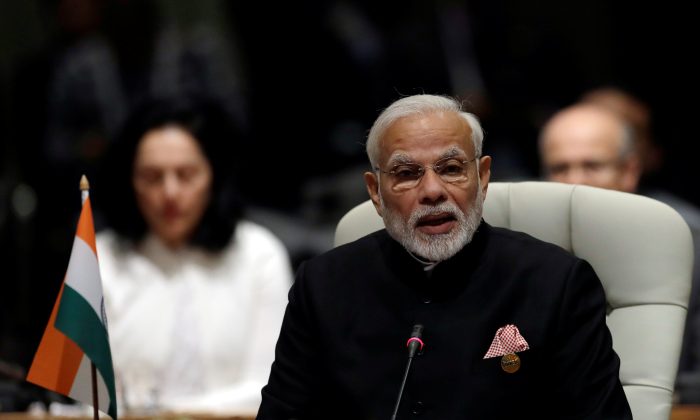 ISLAMABAD—Indian Prime Minister Narendra Modi called Imran Khan on Monday, July 30, to congratulate him on his party’s victory in the Pakistan general election, with both men discussing regional peace.

It was their first call since Khan’s Pakistan Tehreek-e-Insaf (PTI) party emerged victorious from the July 25 vote that has been marred by claims of pre-election rigging and irregularities on the day.

Relations between the nuclear-armed rivals have frayed in the last couple of years, with direct talks stalled amid diplomatic rows and military firing across the Line of Control frontier that divides the disputed region of Kashmir.

Khan, widely seen as Pakistan’s prime minister-in-waiting, is now courting independent candidates and minor parties to form a coalition government in a nation that has fought three wars with India.

In the phone call, Modi “reiterated his vision of peace and development in the entire neighborhood.” according to a statement by India’s Ministry of External Affairs.

Khan declared in his victory speech that he wanted to resolve the long-standing territorial dispute over Kashmir, saying “if India comes and takes one step toward us, we will take two”.

Khan’s media team said he had told Modi it was vital both countries focus on pulling millions out of poverty.

The PTI said Khan had also told Modi that issues between the two nations must be resolved through talks. “Wars can breed tragedies instead of facilitating resolution of conflicts,” he said, according to a PTI statement.

European Union observers say there was uneven playing field during the election as major obstacles were put in the way of a rival party that was led by jailed former premier Nawaz Sharif. The United States has also expressed concern about what it calls electoral “flaws”.

Khan has offered to investigate all claims of irregularities, and promised to build a new Pakistan with an Islamic welfare state that would seek to elevate those mired in poverty.

Some analysts and commentators have said Pakistan’s democracy has been weakened by meddling by the armed forces. Both Khan and the military deny colluding with each other.

Majority-Muslim Pakistan has criticized India in recent years about what it calls New Delhi’s heavy-handed tactics in Kashmir, as well as violence suffered by the Muslim-minority groups in India at the hands of Hindu extremists.