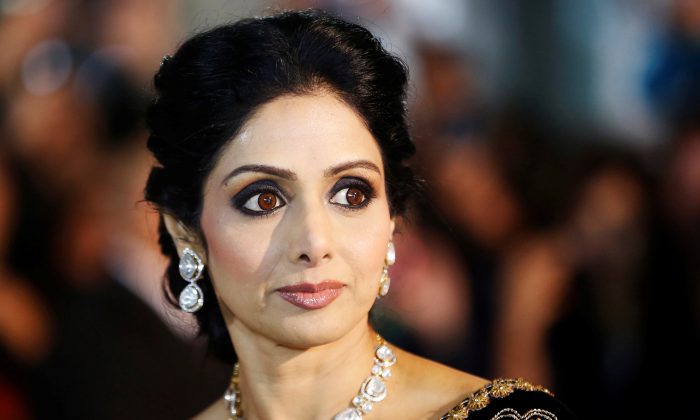 NEW DELHI—Indian actress Sridevi, arguably Bollywood’s first female superstar, died in Dubai after cardiac arrest, media reported on Sunday. She was 54. Sridevi is survived by her husband—producer Boney Kapoor—and daughters Jhanvi and Khushi. She was in Dubai to attend a family wedding and died late on Saturday.

In a career spanning five decades, Sridevi acted in 300 films and was awarded the Padma Shri, India’s fourth-highest civilian honor in 2013.

Born Shree Amma Yanger Ayyapan in the southern state of Tamil Nadu, she started acting at the age of four, appearing in several Tamil-language films in the 1960s and 1970s, and eventually dropping out of school for a career in the movies.

She acted in Tamil, Malayalam, and Telugu films, performing alongside leading men such as Kamal Haasan and Rajinikanth.

Sridevi made her Bollywood debut in 1979 with “Solva Sawan” (16th spring), but it was in 1983, with Balu Mahendra’s “Sadma” (Shock) that she made her mark in the Hindi film industry.

That year she also acted with Jeetendra in K. Raghavendra Rao’s blockbuster “Himmatwala” (The courageous one), cementing her place as one of Bollywood’s top actresses.

Through the 1980s and 1990s she charmed audiences in female-centric films such as “Chandni” (Moonlight) and “Lamhe” (Moments), drawing praise for her comic timing in “Chaalbaaz” (Trickster) and Shekhar Kapur’s “Mr India”, playing feisty characters in contrast to the traditionally coy Bollywood heroine.

Sridevi took a break from films soon after she married producer Boney Kapoor in 1996.

A noticeably leaner Sridevi made a successful return to the big screen 15 years later in Gauri Shinde’s “English Vinglish” (2012), playing a housewife taking English-language lessons. Her last screen appearance was in “Mom” (2017), as a mother avenging her daughter’s rape.

“I have no words. Condolences to everyone who loved Sridevi. A dark day. RIP,” actress Priyanka Chopra said on Twitter.

“She was a veteran of the film industry, whose long career included diverse roles and memorable performances,” Modi said in a tweet.

“We all grew up watching her and suddenly to hear that she is no longer with us is hard to digest,” said cricket legend Sachin Tendulkar.