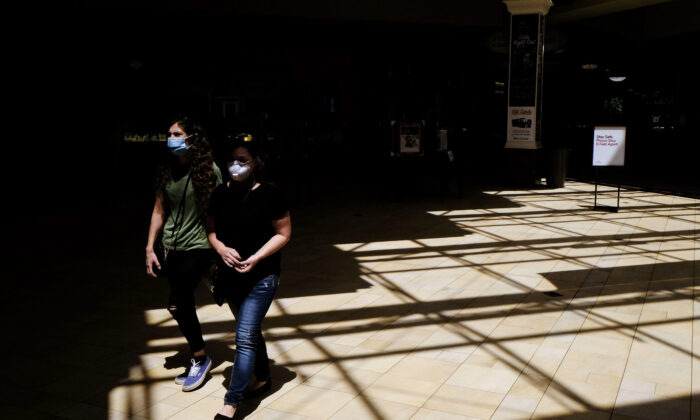 Shoppers walk inside of the Greenwood Park Mall in Greenwood, Ind., on May 4, 2020. (Darron Cummings/AP Photo)
Crime and Incidents

An active shooter at an Indiana shopping mall was killed on July 17 by a “good Samaritan” who was lawfully armed with a handgun, according to officials.

At least four people, including the shooter, were killed after the suspected gunman opened fire in the food court of the Greenwood Park Mall located in the suburbs of Indianapolis, police said.

Greenwood Police Chief James Ison said in a press conference on Sunday that law enforcement responded to reports of an active shooter at the mall at around 6 p.m. local time.

The suspected shooter, who has been identified as an adult male, appeared to be armed with a rifle and several magazines of ammunition, and he entered the food court and began shooting at people, Ison said.

Five people were shot during the incident, four of whom have died from their injuries, Ison said.

Two others were wounded.

The police chief said the victims were one male and four females, including a 12-year-old girl whose parents brought her to the hospital with minor injuries after the shooting,

She is expected to be “just fine.” The second injured victim was hospitalized and in stable condition as of Sunday evening, Ison said.

The suspected gunman was taken down by a 22-year-old “good Samaritan” from Bartholomew County who was lawfully armed and “observed the shooting in progress,” Ison said, referring to the individual a “real hero.”

“The real hero of the day is the citizen that was lawfully carrying a firearm in that food court and was able to stop that shooter almost as soon as he began,” Ison said during a later press conference.

Greenwood Mayor Mark Myers also said in a statement on Sunday that the suspect was “shot by an armed individual,” adding that the tragedy “hits the core of our community.”

In a separate statement, Myers thanked the armed bystander, whom he also referred to as a “good Samaritan,” who was able to stop further bloodshed.

“This person saved lives tonight. On behalf of the City of Greenwood, I am grateful for his quick action and heroism in this situation.”

Police do not yet have a motive for the attack and are continuing to investigate the shooting alongside multiple other agencies, and speaking to people who were inside the mall at the time of the attack.

“This has shaken us to our core. This isn’t something we’ve seen in Greenwood before. It is absolutely horrendous,” Ison told reporters.

SWAT teams have cleared the shopping mall and determined there was no threat to the area as of Sunday night. Investigators are currently examining the scene where the shooting took place.

Sunday’s shooting comes shortly after a string of mass shootings across the United States, including in Buffalo, New York, and Uvalde, Texas, prompting congressional lawmakers to pass a gun control bill aimed at reducing the threat of gun violence across the country.

There have been 352 mass shootings in the United States so far this year, according to Gun Violence Archive.