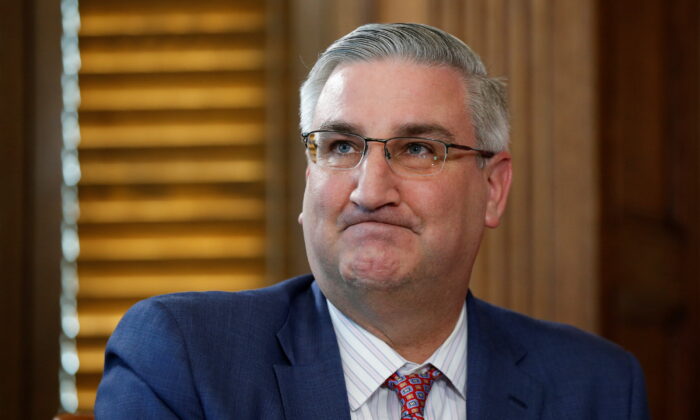 TAIPEI—The governor of Indiana arrived in Taipei on Aug. 21, becoming the latest official from the United States to visit Taiwan and defying pressure from the Chinese regime not to allow such trips.

Gov. Eric Holcomb wrote on Twitter that he would also be visiting South Korea, while Taiwan’s presidential office said he would meet with President Tsai Ing-wen on Aug. 22.

He termed his visit to Taiwan and South Korea an “economic development trip,” saying he was the first U.S. governor to come to Taiwan since the COVID-19 pandemic began more than two years ago

The Chinese communist regime, which claims democratically governed Taiwan as its territory over the Taipei government’s strong objections, has been carrying out war games and drills near Taiwan since U.S. House Speaker Nancy Pelosi led a group of Congress members on a two-day visit to the island nation earlier this month. Last week, a second group of U.S. lawmakers visited Taiwan.

There was no immediate response from the Chinese regime to his arrival.

“Our delegation will spend this week meeting with government officials, business leaders, and academic institutions to further strengthen Indiana’s economic, academic and cultural connections with Taiwan and South Korea,” Holcomb wrote in a tweet.

Taiwan’s Foreign Ministry said he also would meet with representatives from Taiwanese semiconductor companies, although it gave no details, and would sign various trade and technology memorandums of understanding.

The Chinese regime says Taiwan is the most important and sensitive issue in its relations with Washington, and that it considers anything to do with the island an internal issue.

Taiwan’s government says that since the People’s Republic of China (PRC) has never ruled the island, it has no right to claim it, and only Taiwan’s 23 million people can decide their future.

China’s military drills have been continuing around Taiwan, although on a smaller scale than the war games conducted immediately after the trip by Pelosi, who is the highest-level U.S. official to visit in decades.