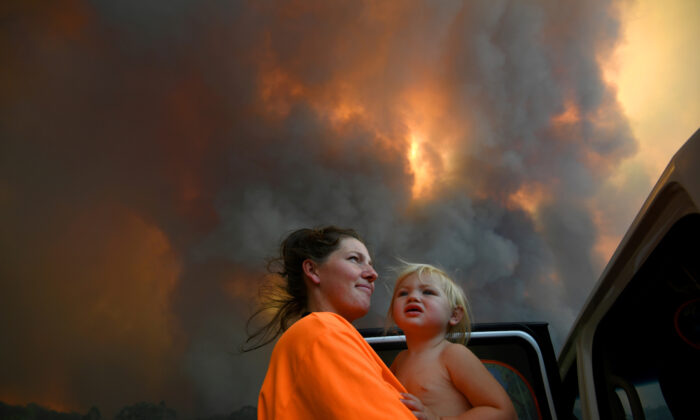 Sharnie Moren and her 18-month-old daughter Charlotte look on as thick smoke rises from bushfires near Nana Glen, near Coffs Harbour, Australia, on Nov. 12, 2019. (Dan Peled/AAP via Reuters)
Australia

Early January 2020 is likely to see a temperature imbalance in the Indian Ocean dissipate, according to the Australian Bureau of Meteorology (BOM), which may help create more favorable climatic conditions for Australia’s bushfire ravaged east coast.

BOM stated that unusually significant differences between sea-surface temperatures in opposite parts of the Indian Ocean, referred to as the Indian Ocean Dipole (IOD), has been a major cause of this year’s extreme climate conditions.

Temperatures in the eastern part of the ocean oscillate between warm and cold compared with the western part, cycling through three phases, which meteorologists call “positive,” “neutral,” and “negative.”

A positive IOD occurs when waters near the Horn of Africa are warmer than average, while cooler waters develop off Indonesia, resulting in less rainfall and high temperatures for Australia.

The dipole’s very strong positive phase this year—its strongest in six decades—has therefore had a big impact on Australia’s climate. It’s led to a drying influence over many parts of the country as well as reduced rainfall and low humidity, enhancing potential evaporation and increasing the risk of fires.

However, BOM stated that while the drier than average conditions being experienced are forecast to ease heading into 2020, the rainfall outlook for January to March will not bring the rainfall needed to “see a recovery from current long-term rainfall deficiencies.”

On a positive note, the forecast said that the existing negative Southern Annular Mode (SAM), in which westerly winds have expanded toward the equator, started to decay southward at the end of December. In summer, this shift is often associated with more moist onshore flow from the east, which leads to increased rain over eastern Australia.

Duell added that as the drivers continue to weaken, the chance of rainfall will rise, although much of the country may still be subject to warmer than usual conditions over the summer, particularly in the east as the impacts of the IOD and SAM linger.

“The not-so-good news is the effects of these drivers are likely to linger. If we look at the first quarter of 2020, we can see that days remain likely warmer than average,” he said.

“Evenings are also likely to be warmer than average. So again, a continuation of that elevated risk of bushfires and heatwaves will likely continue into the first quarter of 2020. In terms of rainfall, we have quite a neutral outlook.

“For most of Australia, there’s no strong indication either way of it being particularly wet or particularly dry,” he said.

According to BOM, the IOD event peaked in mid-October, when waters around East Africa were roughly 2 degrees Celsius warmer than those near Australia.

So far, record-low rainfall across Australia has contributed to widespread bushfires that have devastated more than 5 million hectares (about 12.4 million acres) of land and killed nine people.

Meanwhile, thousands of miles away in East Africa, the opposite has been seen as intense rain wreaks havoc.

Devastating flooding and landslides have killed more than 280 people, and hundreds of thousands more have been forced to flee their homes, according to the U.N. Office for the Coordination of Humanitarian Affairs.

At least 2.8 million people have been affected by severe weather conditions, which have destroyed homes and infrastructure and increased the risk of infectious diseases including cholera.

Correction: This article has been corrected to clarify that higher than average rainfall is not yet forecast for the fire affected regions of eastern Australian.