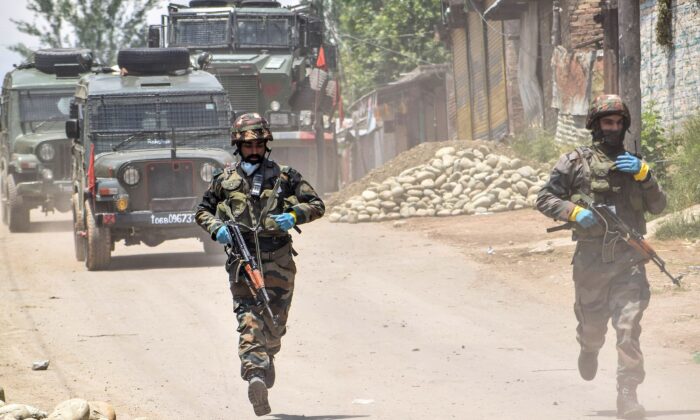 Security personnel run patrolling near the site of a gunbattle in Kangan area of south Kashmir's Pulwama district on June 3, 2020. At least three alleged Jaish-e-Mohammed terrorists were killed during a gunbattle with security personnel on June 3 at Kangan village of Pulwana district, local media reported. (STR/AFP via Getty Images)
India

Indian forces have killed a top commander of the Jaish-e-Mohammad (JeM) Islamist terrorist group and four other terrorists in India-administered Kashmir, police said on Sunday.

“We had launched two separate operations on the basis of inputs about the presence of militants in these areas last night. Five militants, including JeM commander, Zahid Wani, and a Pakistani national, Kafeel, were killed in these two operations,” Kumar said.

A police officer was shot to death by the terrorists outside his residence Saturday evening in the south of Srinagar, Kumar said.

JeM, also known as Army of the Prophet, is listed as a major terrorist group in India by the U.S. State Department. Analysts say it was formed with support from the Afghan Taliban, Osama bin Laden, and several Sunni extremist groups active in Pakistan. The group frequently clashes with Indian security forces in Jammu and Kashmir, although no large-scale attacks have been launched since a suicide attack killing 40 Indian Central Reserve Police Force personnel in February 2019.

Last year, the disputed region witnessed a wave of civilian killings, with terrorists seemingly targeting non-Kashmiris, including migrant workers, and members of the minority Hindu and Sikh communities in the Muslim-majority Kashmir valley.

Indian forces in the heavily militarized region responded with a widespread crackdown.

More than 189 terrorists were killed in Kashmir last year, a police official said.