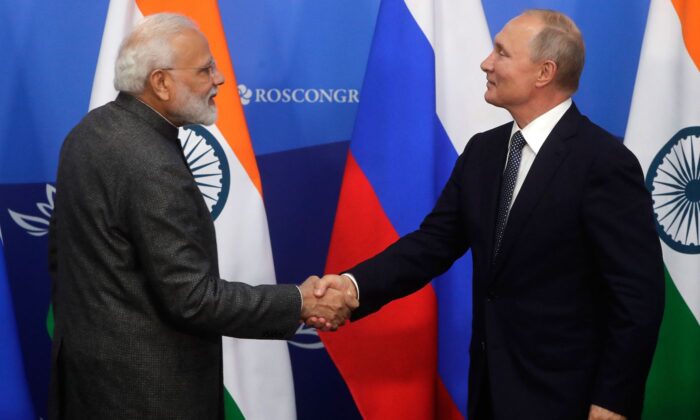 For cheap oil, New Delhi throws Ukraine under the bus

India is profiting from the blood of Ukrainians again. It’s buying Russian gas and oil at discounts only available because most of the world markets are shunning the tainted exports.

Russia is offering discounts as much as 35 percent below market price—if one can stomach the ethical qualms of paying for the bombs now collapsing schools and hospitals in Kharkiv and the Donbass.

Bloomberg News reported on May 9 that Indian gas importers will continue to buy Russian liquid natural gas “as long as the Russian fuel remains cheaper than rival suppliers,” according to a Bloomberg source.

When oil traded at almost $108 a barrel on May 4, India tried to get Russian cargoes for less than $70 “to compensate for additional hurdles, such as securing financing for purchases,” according to Bloomberg.

India has imported over 40 million barrels of Russian crude since Vladimir Putin invaded Ukraine in February, increasing 20 percent over all of India’s 2021 imports from the dictatorship. New Delhi is absolutely greedy for cheap Russian energy and apparently cares little for the consequences in Ukraine.

“Prime Minister Narendra Modi has so far resisted Western encouragement to scale back its relationship with Moscow because of the opportunity to get heavily discounted oil,” according to Bloomberg.

“India is also highly dependent on imports of Russian weapons.”

The money need not go straight to banks in Moscow. The Kremlin probably prefers that India act as an import-export bank that guarantees payments to businesses that export to Russia. That would provide a tidy end-run around sanctions and additional value that must be paid for to Moscow.

Other countries also buy Russian energy, including Russia’s top importers, China, the Netherlands, and Germany. But Beijing is already expected to do the wrong thing, and Russia’s European customers are moving to other markets as quickly as they can.

The 30-year gas deal that Xi Jinping agreed with Putin just prior to the invasion was probably a green light for Ukraine’s bloodshed to begin. Prices were to be settled in euros, which are now frozen for Moscow. That gives Beijing an opportunity to renegotiate them lower. There’s no honor among thieves.

The world should impose secondary sanctions on China for its continued and egregious economic and diplomatic support to Russia. That would serve as a warning to India.

This is the right strategy.

As from Germany and the Netherlands, the world should expect more from India. Rather than opportunism based on other countries’ pain, we should expect New Delhi to reduce hydrocarbon purchases to zero by the end of 2022.

India should want the same sanctions against China and Pakistan for their transgressions against Indian territorial integrity. New Delhi could negotiate this through closer relations with the United States and allies.

Yet it persists in a failed friendship with Moscow, based on its confused, isolationist, and non-ethical approach to international relations. New Delhi has been slow to join other democracies in standing against the worst forms of dictatorship in part because it continues to follow the strategy of non-alignment, and because among some of its foreign policy elites, it harbors its own ambitions to deepen trade with Russia and China to enable it as a regional superpower over central and south Asia.

These goals are Moscow and Beijing talking points, and will only lead to India’s global ostracization and ultimate double-cross by dictatorships that are opposed to India’s freedoms, market integration with other democracies, and ultimate success.

Yet, it explains New Delhi’s continued chilly response to U.S. attempts to move from an informal security cooperation in the Quadrilateral Security Dialogue with Australia and Japan (the “Quad”), to a more formalized security alliance. Such formalization would immensely assist India against China and Pakistan’s aggression in the Himalayas and elsewhere.

If India continues down the path of undermining Ukraine and other democracies through oil and gas purchases from Russia, then India itself should be subject to secondary sanctions.