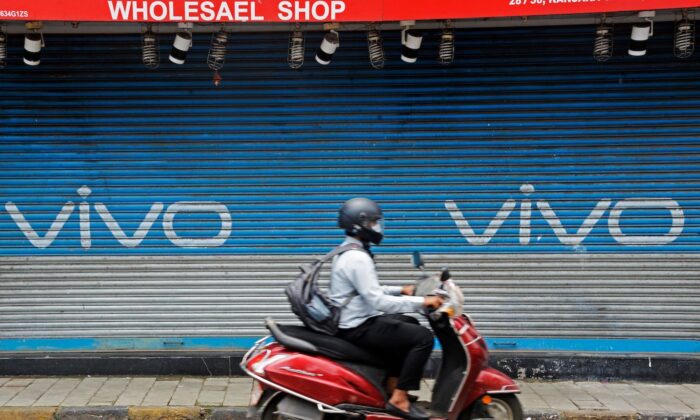 A scooterist rides past an advertisement of Chinese mobile phone maker Vivo, painted on a shuttered shop of a market in Mumbai on July 31, 2020. (Indranil Mukherjee/AFP via Getty Images)
India

The Indian Enforcement Directorate said that Vivo India remitted 62.47 billion rupees ($7.9 million), or almost 50 percent, of its total turnover outside the country, mainly to China.

“These remittances were made in order to disclose huge losses in Indian incorporated companies to avoid payment of taxes in India,” the directorate said in a statement.

It conducted searches in 48 locations belonging to Vivo India and 23 related entities on July 5, after an initial probe found that shareholders used “forged identification documents and falsified addresses at the time of incorporation.”

Vivo India’s employees, including some Chinese nationals, did not cooperate with the search proceedings and had attempted to “abscond, remove and hide digital devices,” the directorate said.

It also claimed that the addresses provided by the directors of Grand Prospect International Communication—one of Vivo India’s shareholders—were a government building and the residence of a top bureaucrat.

Vivo India was incorporated in August 2014 as a subsidiary of Hong Kong-based Multi Accord Ltd. All of its three directors, Zhengshen Ou, Bin Lou, and Zhang Jie, fled India in 2018 and 2021, according to the directorate.

The Epoch Times has reached out to Vivo India for comment.

The Chinese Embassy in India criticized Indian authorities for “the frequent investigations” into Chinese firms, saying that such moves “impede the improvement of business environment in India” and “chill the confidence and willingness” of businesses from other countries.

“We are following the issue closely,” the embassy told reporters, adding that the Chinese regime had reminded Chinese enterprises to abide by laws and regulations overseas.

The investigation on Vivo India comes after the directorate raided Chinese smartphone maker Xiaomi in May, and seized $725 million over the company’s illegal remittances to three foreign-based entities in the guise of royalty payments.

Xiaomi later stated that its royalty payments were “legit and truthful” as they were used “for in-licenses technologies and IPs used in our Indian version products.”