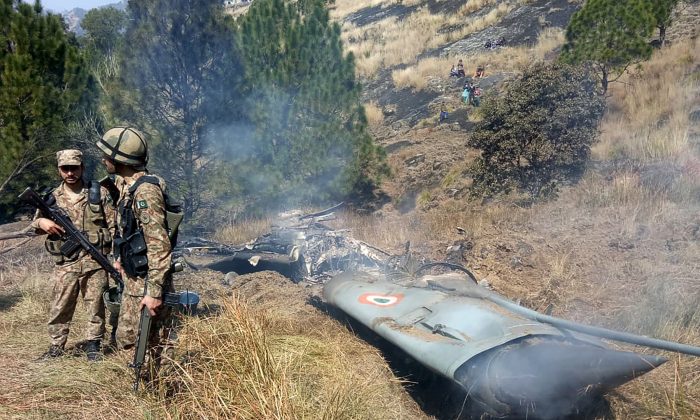 Pakistani soldiers stand next to what Pakistan says is the wreckage of an Indian fighter jet shot down in Pakistan controled Kashmir at Somani area in Bhimbar district near the Line of Control on Feb. 27, 2019. (STR/AFP/Getty Images)
International

India, Pakistan Claim to Down Each Other’s Jets as Kashmir Tensions Intensify

India and Pakistan both said they shot down each other’s military jets on Feb. 27, with Pakistan capturing an Indian pilot.

Over the past two days, both countries have ordered airstrikes—the first time in history that two nuclear-armed powers have engaged in airstrikes—as ground forces also exchanged fire in over a dozen areas.

The downed jets triggered global powers to urge both sides to show restraint and comes a day after Indian warplanes struck inside Pakistan. Tensions between the countries have escalated since a suicide car bombing by Pakistan-based militants in Indian-controlled Kashmir on Feb. 14 that left at least 40 Indian paramilitary police dead.

Tensions escalated further when India launched an air strike on Feb. 26 against what it said was a Pakistani militant training base. A senior Indian government source said that 300 militants were killed in the strike; Pakistan said no one was killed.

U.S. Secretary of State Mike Pompeo said he spoke with the Indian and Pakistani foreign ministers and urged them to deescalate the situation. Pompeo said he advised Pakistan to take more action against terrorist groups in that country.

“Following Indian counterterrorism actions on February 26, I spoke with Indian Minister of External Affairs [Sushma] Swaraj to emphasize our close security partnership and shared goal of maintaining peace and security in the region,” he said in a press statement.

“I also spoke to Pakistani Foreign Minister [Shah Mehmood] Qureshi to underscore the priority of de-escalating current tensions by avoiding military action, and the urgency of Pakistan taking meaningful action against terrorist groups operating on its soil.”

Pompeo said that he encouraged both countries to “avoid escalation at any cost” and hoped the two ministers would prioritize direct communication and avoid any further military activity.

Meanwhile, a video of an alleged Indian pilot who had been shot down was posted on the Pakistani government’s official Twitter account. Pakistan claimed the man in the video, who was shown with a bloodied face and blindfolded, was Wing Commander Abhi Nandan.

In the video footage, the pilot gives his name and service number before telling the man questioning him, “I’m sorry, sir, that’s all I’m supposed to tell you.”

In a statement, India’s foreign ministry said the way the pilot was treated in the video was a “vulgar display of an injured personnel of the Indian Air Force in violation of all norms of international humanitarian law and the Geneva Convention.”

The ministry ordered the pilot’s immediate release. India hasn’t yet named the pilot.

Days ago, President Donald Trump described the tensions between the two countries as a “very dangerous situation” and made reference to the Kashmir bombing.

“A lot of people were just killed and we want to see it stopped,” he told reporters at the Oval Office on Feb. 22. “We’re very much involved in that.”

“India is looking at something very strong,” he added. “India just lost almost 50 people with an attack, so I can understand that also. But we’re talking and a lot of people are talking … it is a very, very delicate balance going on right now.”

Pakistan and India have fought three wars since independence from British colonial rule in 1947—two of them over the disputed Himalayan region of Kashmir—and went to the brink of a fourth in 2002 after a Pakistani militant attack on India’s parliament.

The latest escalation marks a sudden turnaround in relations between the two countries, which both claim Kashmir in full, but rule in part. Many of the facts in the latest series of engagements are disputed by the two sides.